Home General Naucrates review, luggage that follows you around the airport
8081
SHARES
ShareTweet

Naucrates review, luggage that follows you around the airport – 9to5Mac

If you wanted to craft the perfect PR pitch to me, you couldn’t do much better than Naucrates. I’m a bagaholic who loves gadgets, so when it offered me the chance to try its new carry-on luggage which follows you around the airport, it was impossible to resist.

Oh, and I almost forgot to mention: you can also ride on it if you prefer…

The unusual white color aside, the Naucrates doesn’t look very different from any other modern carry-on roller luggage.

It has a hardshell casing in a gloss finish, four wheels, a pull-out handle (for manual wheeling) and a TSA-compliant lock.

Capacity is 36 liters, and it weighs just over a pound when empty.

Check out the video at the end of the review for a better sense of the look. 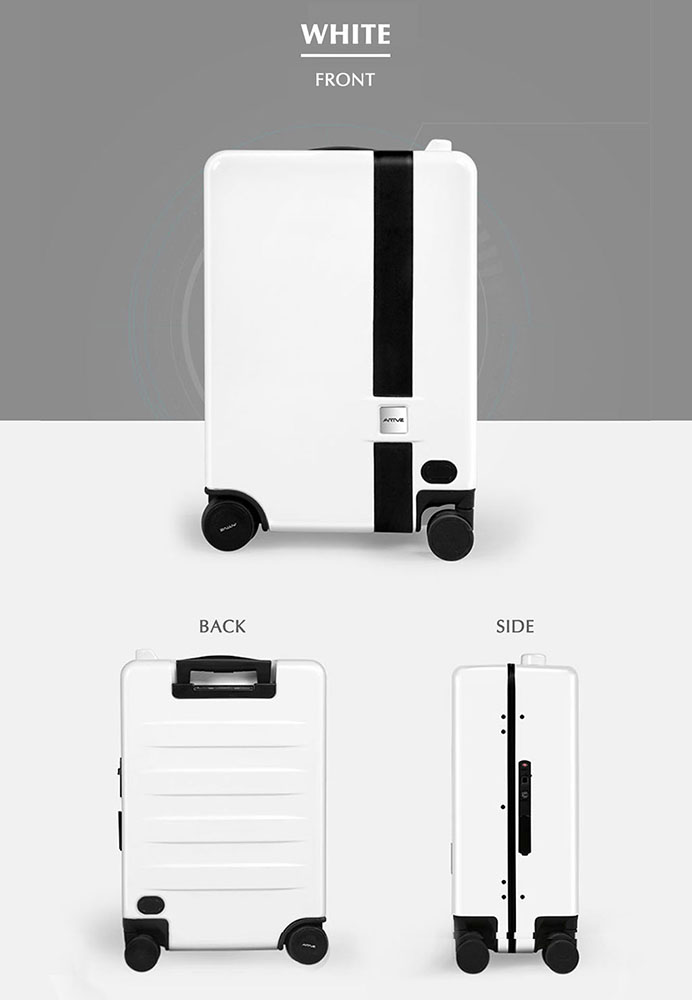 There’s a black, offset band running vertically down the front of the suitcase, with relatively discreet Artvz branding on a badge set into this hand, and again in the rubberized lifting handle on the top. 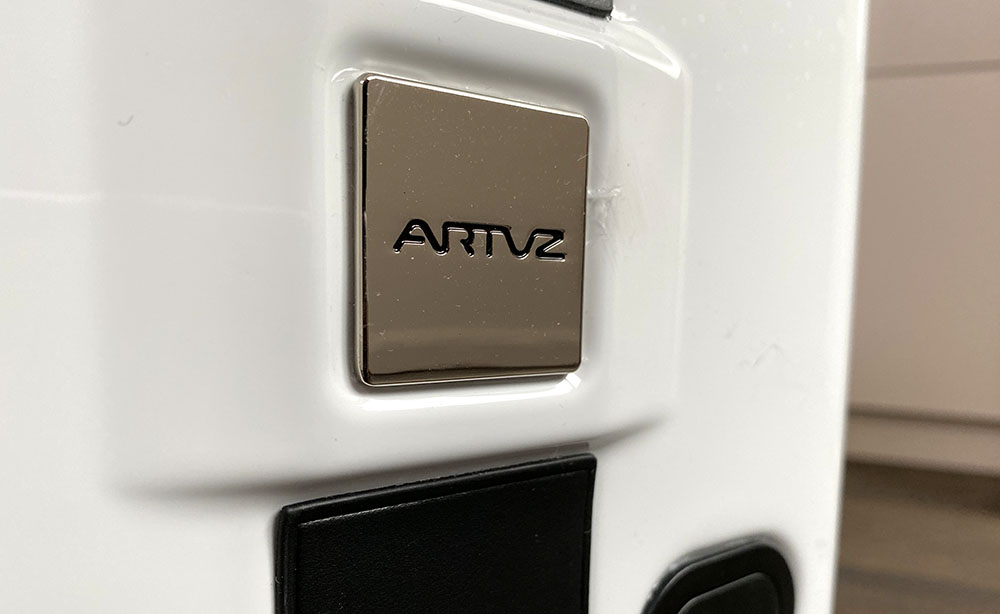 The only unusual thing that stands out a little at first glance is a black protrusion from the top of one side of the case. This contains the tech needed for the follow-me function. Microphones to pick up the ultrasonic signals from the remote, and an infra-red sensor used for collision-avoidance. 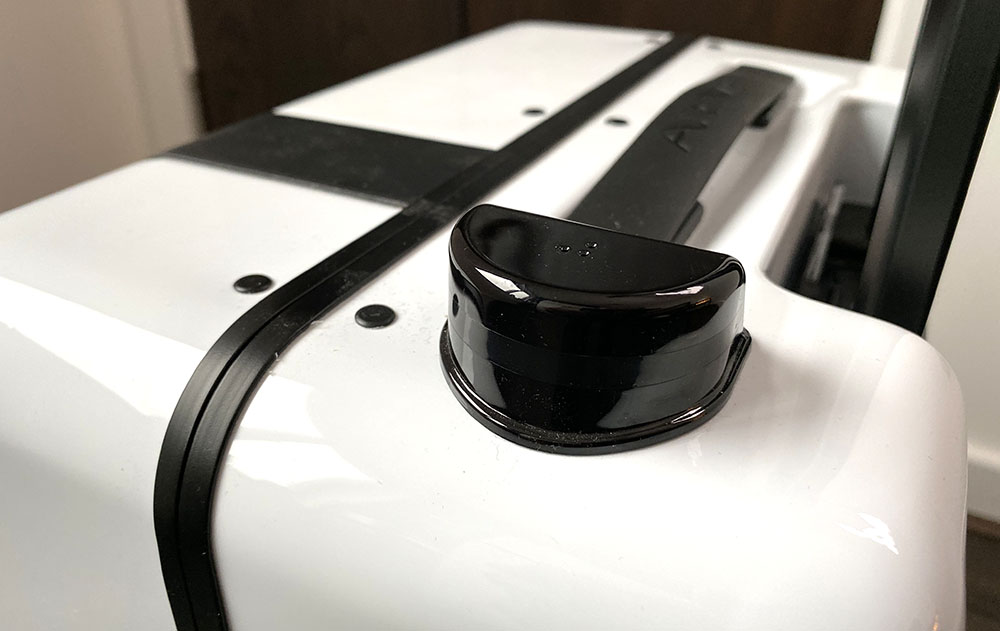 You’d have to look very closely indeed at Naucrates to see a second hi-tech feature: a fingerprint reader that can be used instead of a key to unlock the suitcase.

Finally, you’d have to lift a flap beneath the handle to reveal the third sign that this is no ordinary luggage: a USB-A port for charging a smartphone or other device, a small display panel with a battery-life percentage and a power button. 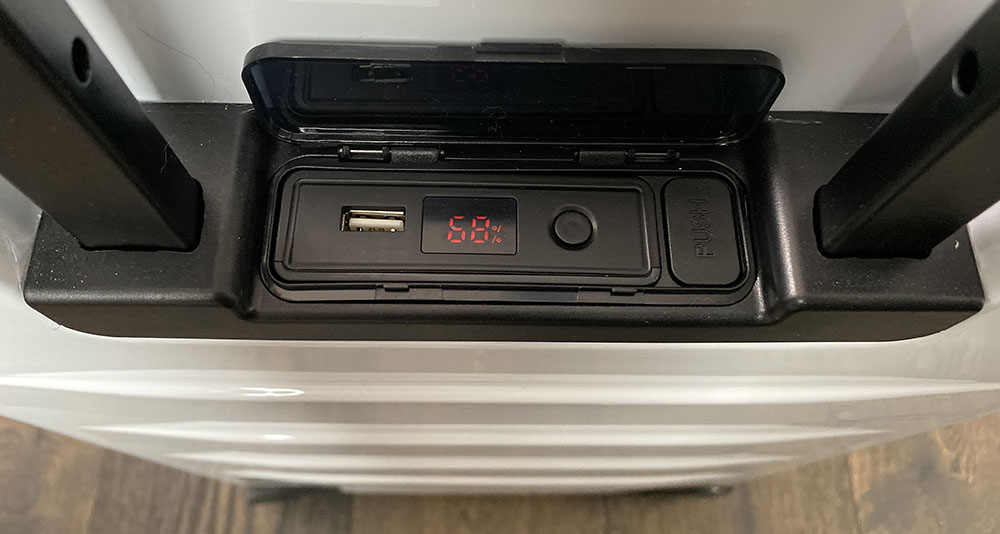 There’s also a push-button release for the battery. Press this, and the entire battery pops up. You can then slide it out for easy charging. This slides easily in and out. 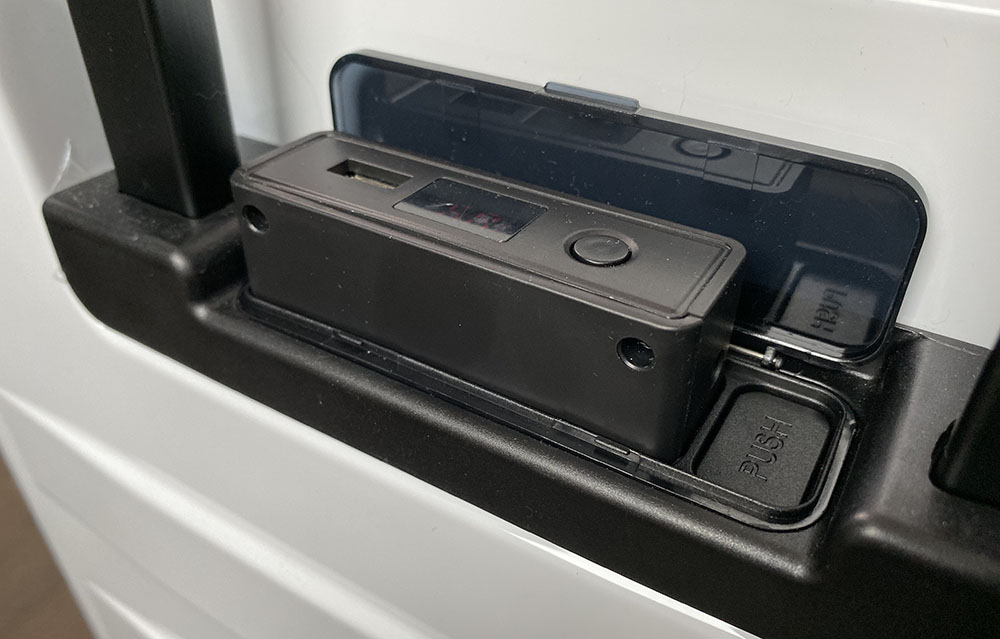 You could also carry the battery on its own in another bag to use as a power-bank. The battery is an 80.1W one and is TSA-approved for carry-on baggage. It comes with a very neat three-in-one cable that plugs into the suitcase at one end and gives you USB-C, Lightning and MicroUSB connectors at the other end.

Finally, the Naucrates suitcase is supplied with a white plastic remote, around the size of a typical air-conditioner remote. This is a dual-function device, combining an ultrasonic emitter used in the follow-me mode, and a joystick for steering in ride-on mode. 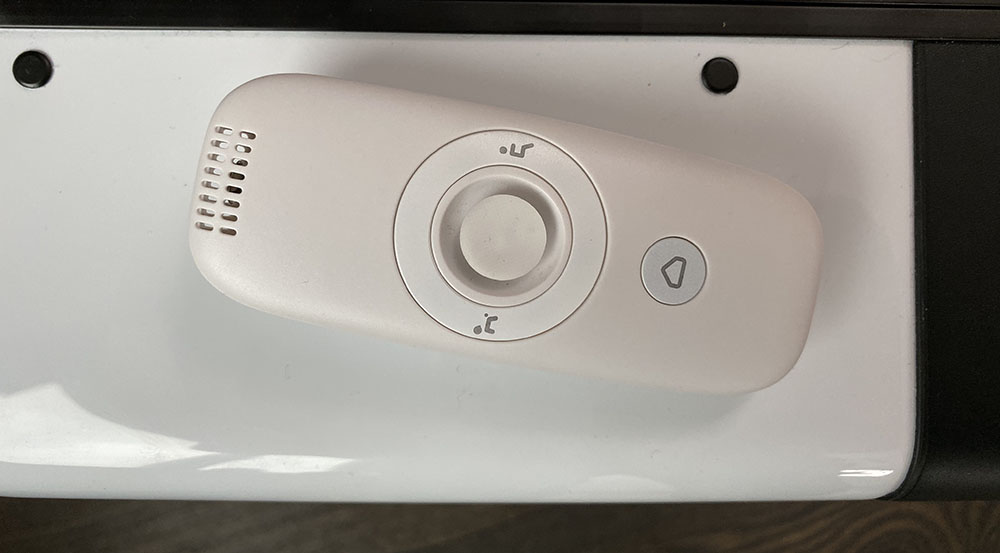 The suitcase can be wheeled manually, like any other. The only real difference here – which is a slight drawback – is that only the front two wheels swivel; the rear ones are fixed. Most modern roller-luggage allow all four wheels to swivel for effortless movement in any direction. The fixed wheels here are to permit more accurate following, and better control when riding.

But this is a relatively small thing, and in general, it wheels as well as any other case. There is certainly no resistance evident from the motors.

As you’d expect, the automatic modes require a smooth surface, so are really only suitable in airport terminals and other places with a nice flat floor.

With follow-me mode, Naucrates follows you – or, rather, the remote control – around the airport.

Lift the flap, press the power button once and then on the remote press and hold the left button (with a dog icon) for a couple of seconds until it is solid blue.

This, in theory, puts the suitcase into follow-me mode with collision-avoidance activated. Pressing the button briefly puts it into non-collision-avoidance mode. I have no idea why one might even want that – but more on that in a moment.

Follow-me mode does work surprisingly well in terms of actually following you. I say surprisingly, because an ultrasonic signal isn’t a very precise positioning method. It’s essentially using multiple microphones to try to work out the direction in which it needs to move, and the volume to determine how far away you are. Despite this, it does follow reasonably accurately and closely.

Following is, however, jerky. It will wait, then suddenly rocket toward you at high speed in quite a nerve-wracking way, but in my tests it always came to a halt without hitting me.

Sadly, I can’t say the same for innocent things like walls and bollards. The collision-avoidance programming needs a lot of work! I was particularly nervous about it hitting people, so only felt comfortable using follow-me mode in uncrowded conditions. This is a bit of a drawback in a device intended to be used in airport terminals.

The range in this mode is said to be 6.2 miles.

If miles of walking through airport terminals gets to be too much for you, there’s the option to sit on the case and ride it.

There are two recessed footpegs on each side of the bottom of the suitcase. Press and release, and they pop out. Sitting on the case with your feet on these pegs is much more comfortable than you might imagine. 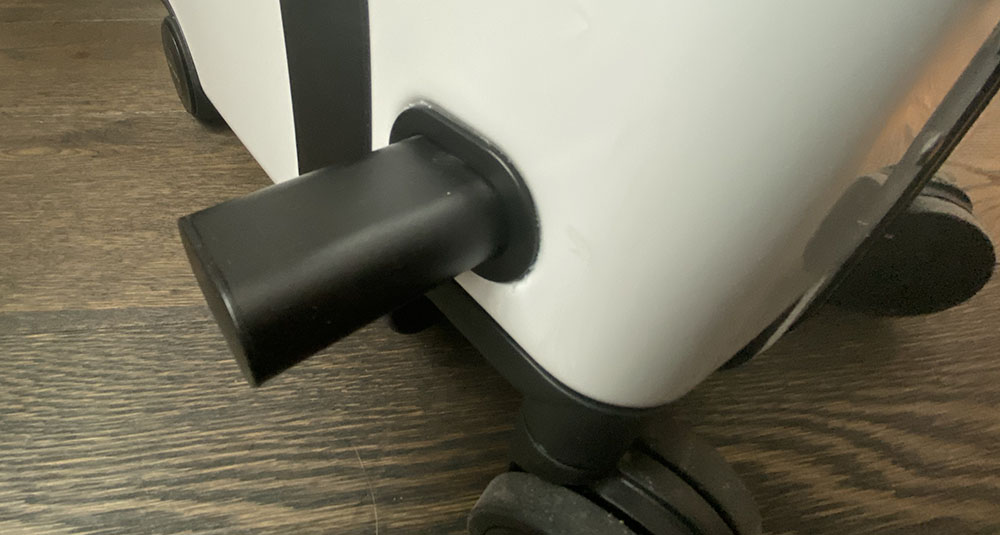 There are two ways of controlling the suitcase in ride-on mode: with the supplied remote, or with an iPhone app. It is, unsurprisingly, much easier to control with the joystick on the remote.

However, ‘easier’ is a relative term. So long as you have plenty of space around you, it works well enough. As with the follow-me mode, however, I didn’t feel comfortable using it in crowded environments. First off the plane and onto an empty corridor? No problem. Dozens of people around you all heading in the same direction, not so much.

Speed is said to be 4.3mph, but I have to say it feels faster. I’d seen it as a somewhat lazy way to get around, but it has to be said it would also make for rather faster journeys around the airport as it’s faster than a brisk walking pace.

Battery-life is cited as 4.3 hours in ride-on mode, which should be enough to cope with riding to and from the most distant airport gates. While I didn’t ride enough to put this claim to the test, I can believe it’s in that sort of ballpark from the battery readings I was getting during testing.

There is another factor to consider about the ride-on mode. I normally have two cabin bags, one this size, and a small laptop or camera bag. That second bag generally sits on top of my roller luggage to move around the airport, and if you’re riding on it, carrying the second bag becomes awkward unless it’s a backpack.

Naucrates’ official retail pricing is said to be $899, but I rather think that is one of those entirely fictitious prices used only for comparison purposes. At the time of writing, Super Early Bird pricing is still available on Indiegogo at $399, which feels a lot more realistic.

Whether it’s worth the money will, I think, depend on several factors. First, and most obviously, how much traveling you do. This isn’t going to be bought by anyone who makes a few trips a year.

Second, the type of airports involved. If it’s very busy ones, I think you’d have to be brave to use either of the motorized options. This really needs quieter terminals, at least in comparative terms – you need a decent amount of space around you to be confident neither you nor the case is going to hit anyone or anything.

Third, your personality! This is not a device for shy people. Whether it’s following you, or you’re riding it, it attracts a lot of attention. Good for people who like chatting with strangers, not so good for those who want to quietly mind their own business.

The usual crowdsourcing cautions apply: most campaigns deliver, but there are exceptions. Atrvz has been around since 2011 and has a good track record, and also has finished-looking pilot production models like the one I tested, providing a reasonable degree of confidence, but you always need to make your own call.

The Naucrates smart case has one week to run on Indiegogo, with $399 Super Early Bird pricing available at the time of writing.

Ben Lovejoy is a British technology writer and EU Editor for 9to5Mac. He’s known for his op-eds and diary pieces, exploring his experience of Apple products over time, for a more rounded review. He also writes fiction, with two technothriller novels, a couple of SF shorts and a rom-com!