Netflix has announced that users will today begin noticing its new thumbs-up and thumbs-down rating system as it appears across various apps and on desktop computers, following a reveal earlier in March that the streaming company was planning to ditch its 5-star rating system.

In the previous system, users had to choose between 1 and 5 stars to determine how much they liked a show, and using that data Netflix displayed the same information back at them for titles they have yet to watch. So for a new TV show, Netflix might suggest it as a 4-star title, meaning it’s something the user should enjoy. This system confused many users over the years, who believed that the stars were a community aggregate of a show’s overall quality, not a personal recommendation system tailored for each user. 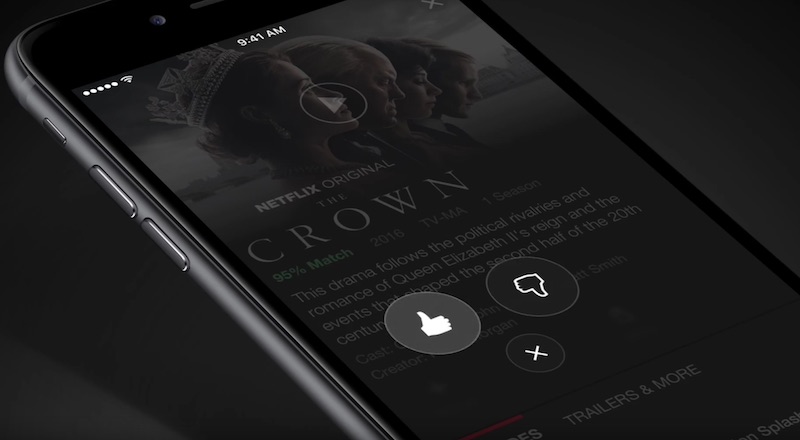 That’ll begin changing today with thumbs, which will ask each user to decide simply whether they want to give a TV show or movie they’ve watched a thumbs-up or thumbs-down, which Netflix compares to dating apps like Tinder in a new promotional video also debuting today.

We are retiring our five-star rating system and replacing it with a simpler and more intuitive thumbs-up and thumbs-down. A thumbs-up tells Netflix that you like something and want to see similar suggestions. A thumbs-down lets us know you aren’t interested in watching that title and we should stop suggesting it to you. You can still search for it, but we’ve heard what you were trying to tell us — you aren’t a fan — and it will no longer show up on your homepage.

In either case, using thumbs helps us learn even more about your unique tastes so we can do a better job suggesting stories we think you’ll love.

With this data, users will also begin seeing far simpler percentage numbers accompanying unseen titles they might be interested in. Called a “% Match score,” Netflix said that this is a prediction of what its algorithm thinks each user might enjoy watching based on what they’ve previously given a thumbs-up or thumbs-down. So a show they might be particularly interested in would have a “95% Match,” for example.

Netflix wasn’t clear on when the new rating system would begin appearing across its devices, like iOS and tvOS, but it’s likely to debut on Netflix.com ahead of the company’s suite of companion apps.
Tag: Netflix

Clicker Is A No-Fuss Netflix App For Mac With Touch Bar Support, Discounted For Limited Time

Netflix isn’t worried about Disney+ or Apple TV+, says it’s ‘excited’ to have the competition