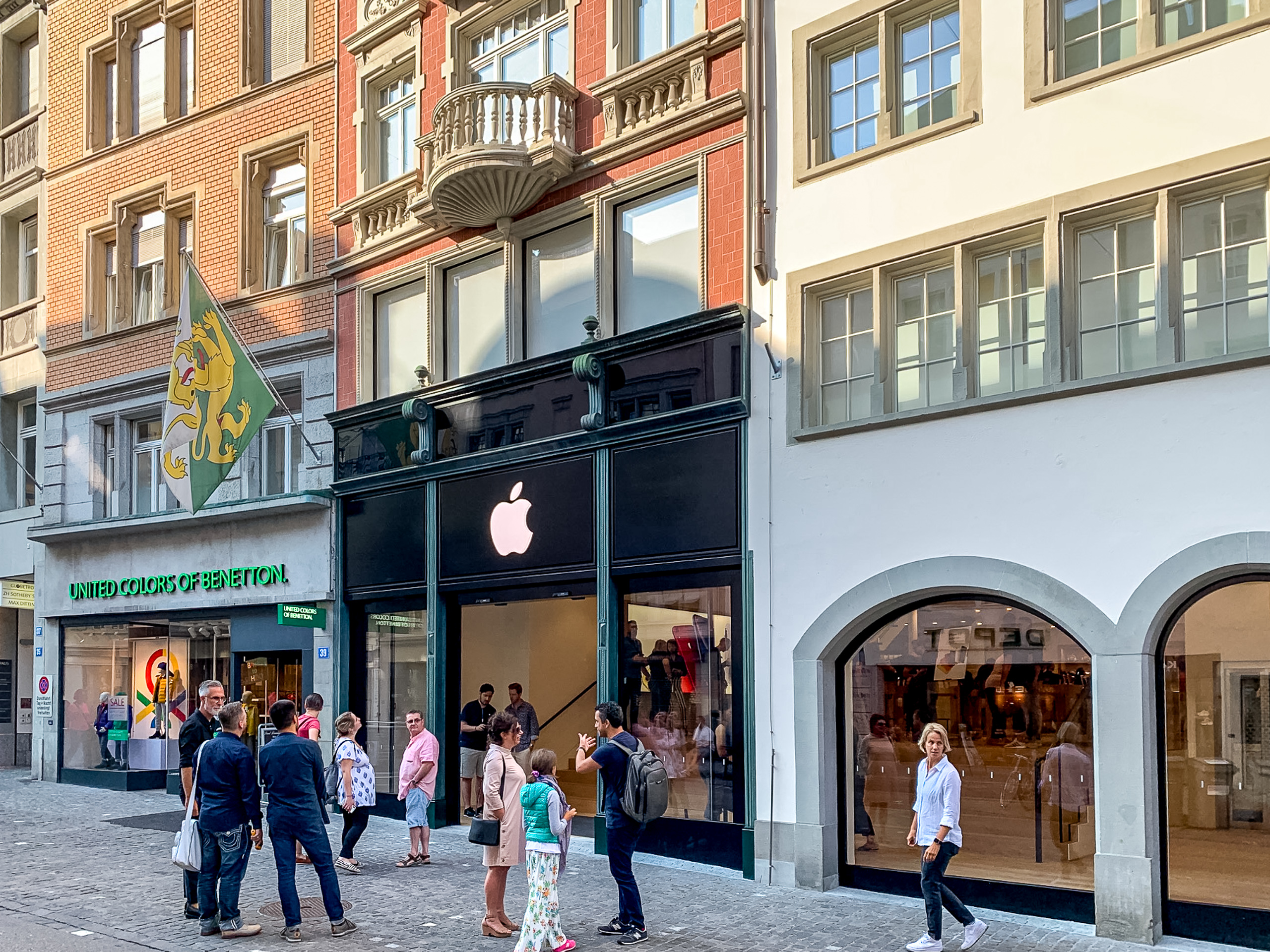 Nestled between the slender and colorful storefronts on Zurich’s Rennweg, Apple’s latest retail store has opened its doors. The new location replaces Apple’s previous home on Bahnhofstrasse, one the most prestigious shopping corridors in all of Switzerland. Both stores are just a short walk apart, but curiously distant in design and stature. Apple Rennweg begins a fascinating new chapter in the story of Switzerland’s Apple Stores.

Blink and you might miss it. Apple Rennweg’s trim facade blends into the quilted streetscape with just a simple white cutout Apple logo mounted above its door. Apple’s space bridges two adjacent structures with contrasting architectural styles, creating an asymmetric storefront that is part brick with large windows and part stucco with arched openings.

Rennweg 43 most recently hosted a temporary Audi e-tron pop-up gallery, but is more notable for its history as the home of toy retailer Franz Carl Weber. On the exterior, Apple has done little to modify the structure. You won’t find any of the company’s signature architectural flourishes here. Manhattan residents might find the overall fit and finish reminiscent of Apple’s temporary Greene St. location that popped up in 2011 while Apple SoHo underwent extensive renovations. 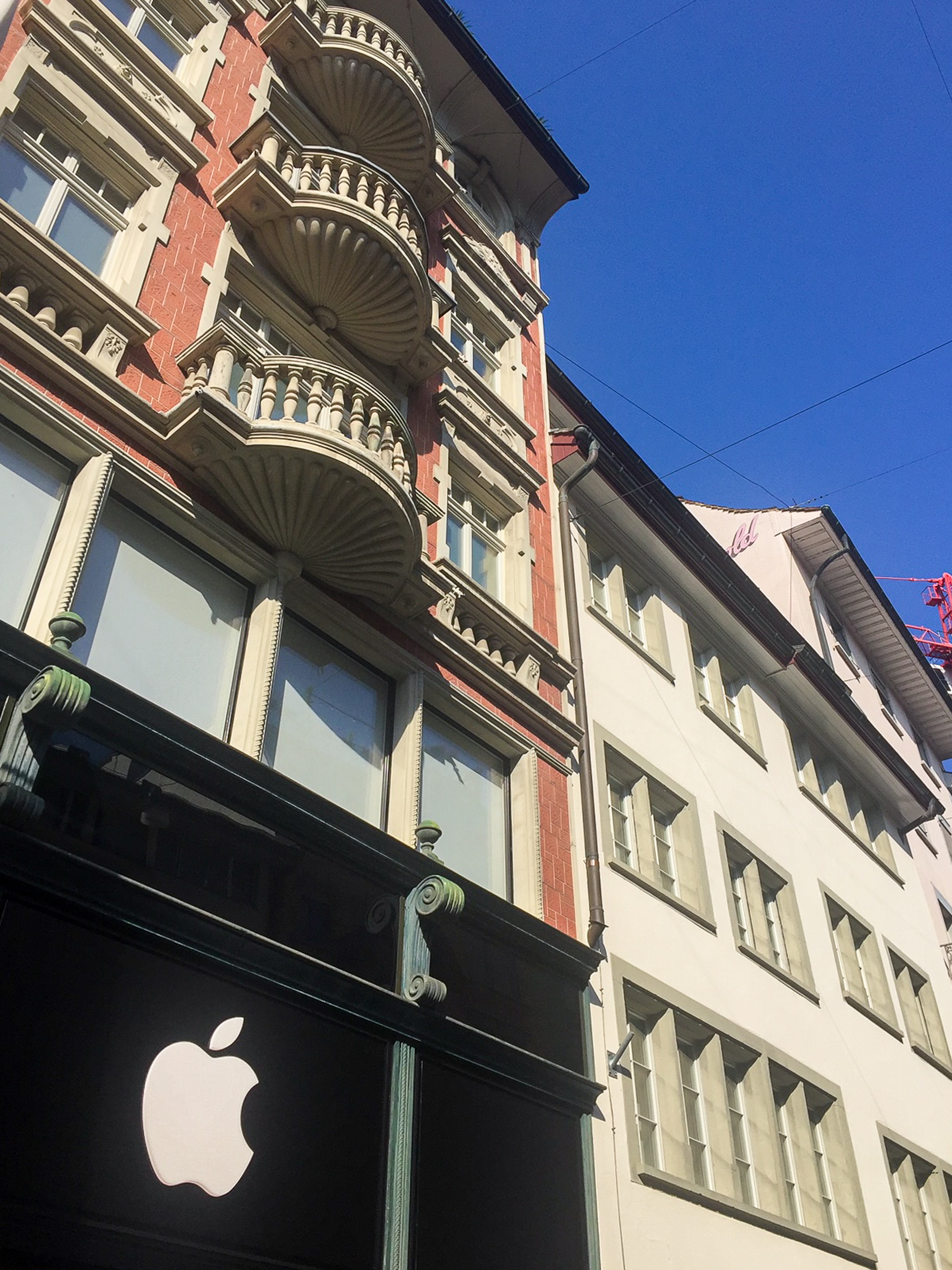 But Apple hasn’t said that its new Rennweg store is temporary. In fact, it hasn’t said much at all about what has shaped up to be a highly unusual change. “We’re moving,” originally read a plain banner on Apple’s website. As was the case with two curious store closures in Texas earlier this year, rumors and assumptions have filled in the blanks in lieu of an official explanation. Multiple Swiss publications believe that Apple’s new store is largely the result of a tenant dispute over the building that housed its previous Bahnhofstrasse location. 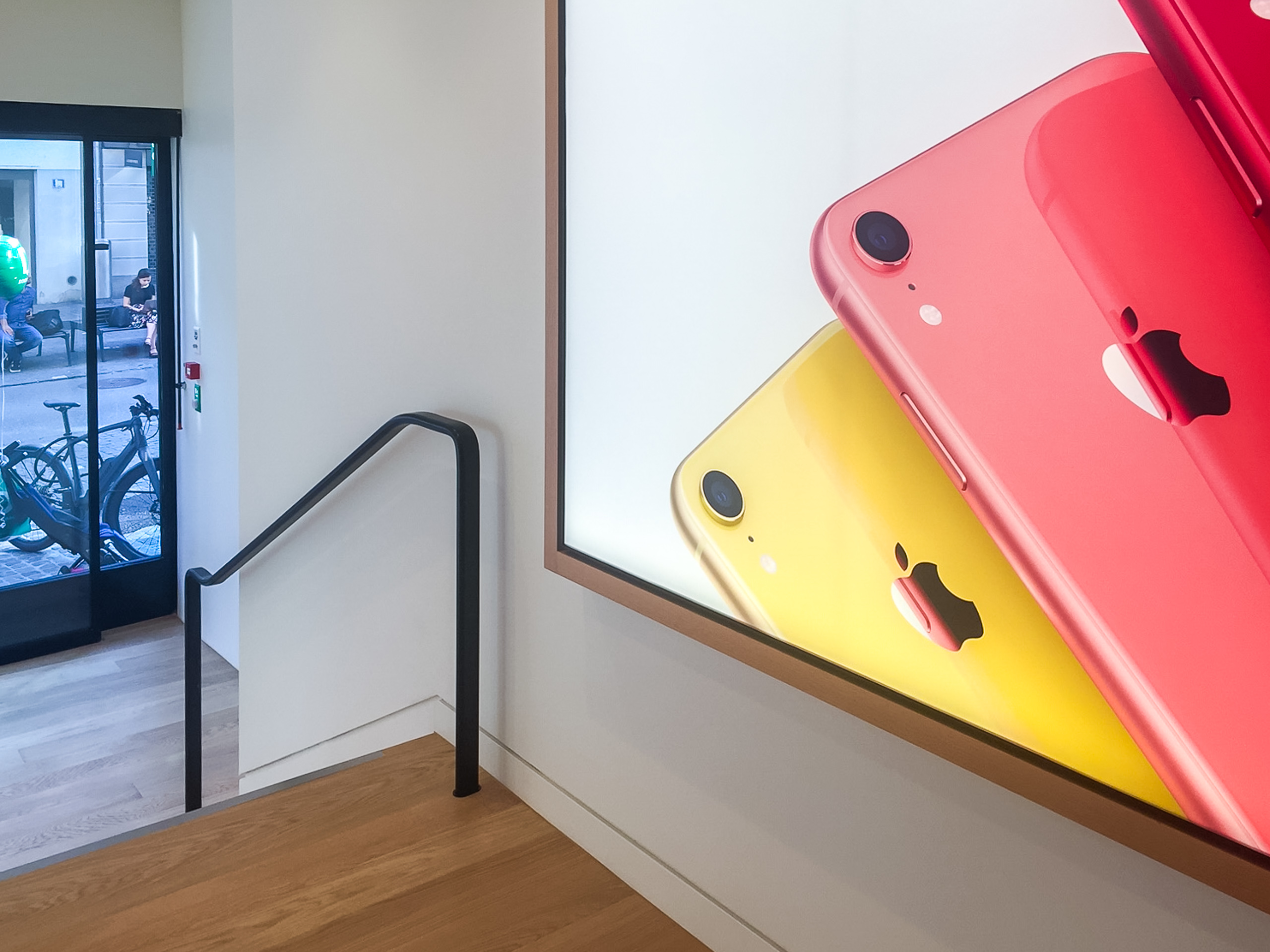 The original store opened in May 2009 and was Apple’s first to offer sales space at both street level and underground. Property owners now wish to redevelop the building, but plans have been problematic and discussion extensive. Apple may have relocated to avoid further involvement. Whether or not a new space on Bahnhofstrasse meeting Apple’s requirements will open up is anyone’s guess. Until that day arrives, if ever, Rennweg is Apple’s new home. 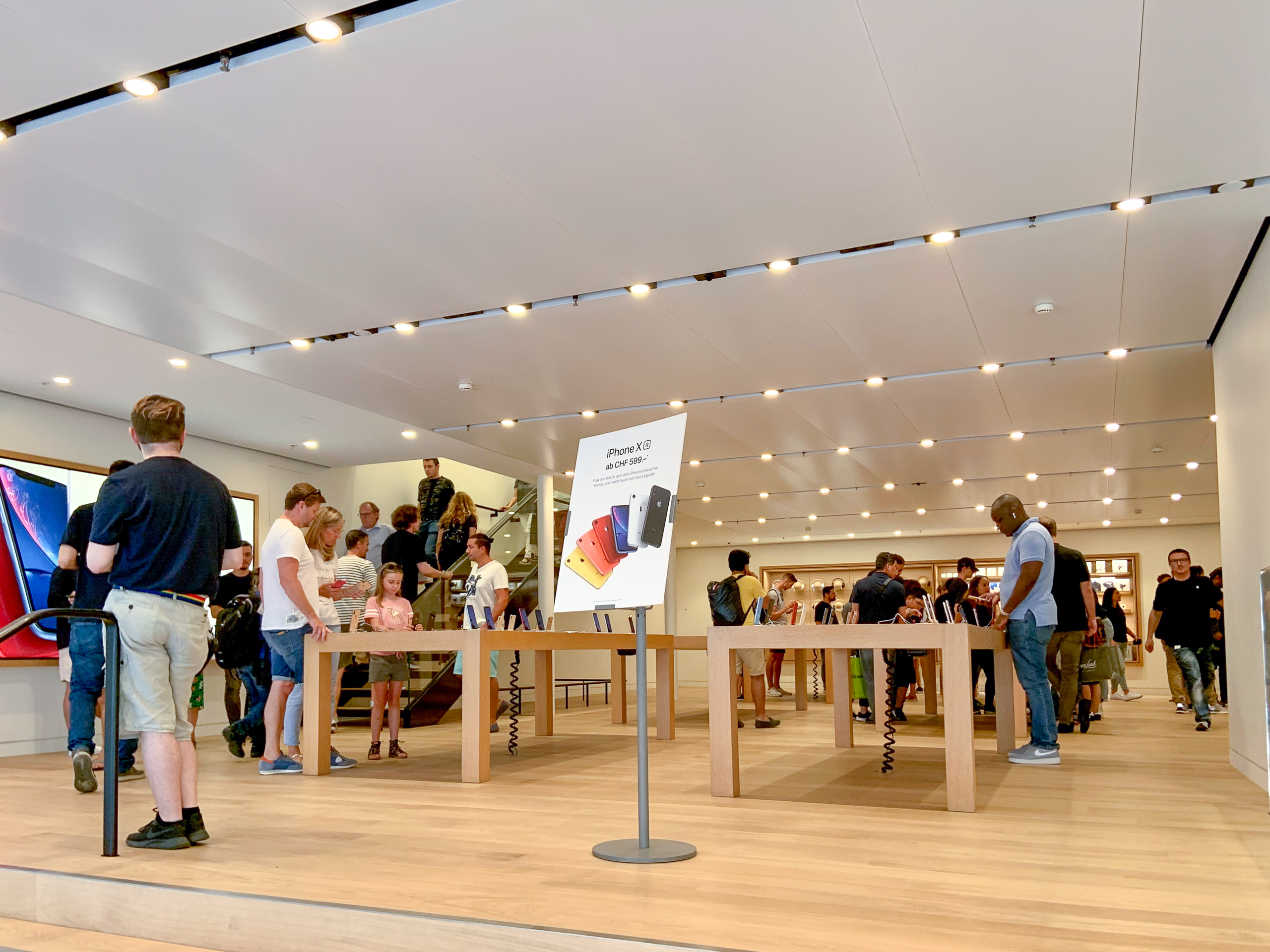 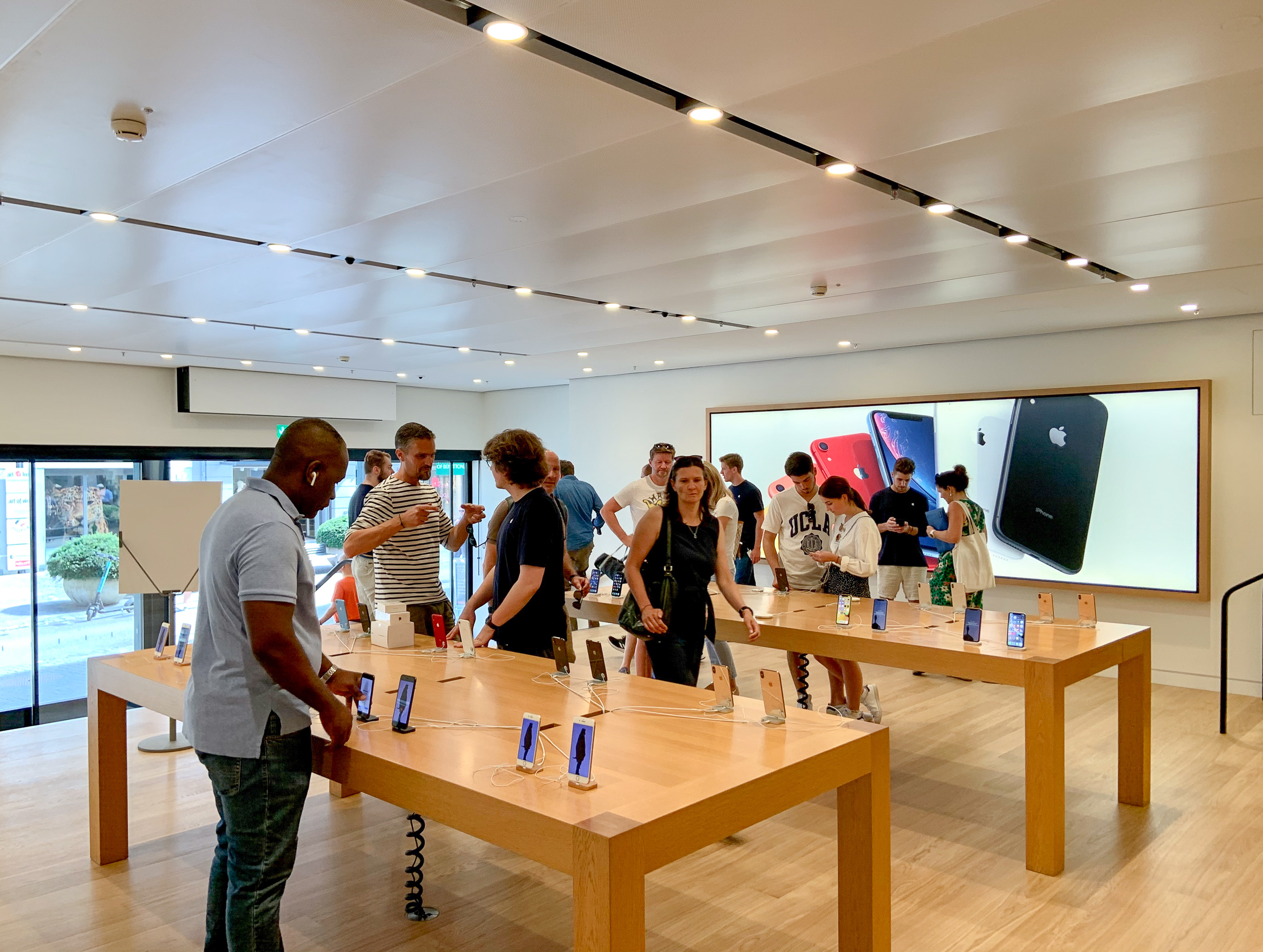 Inside, the store’s layout and size is surprisingly roomier and brighter than the facade indicates. Apple has spread itself across two floors of the historic building, with an industrial staircase connecting both levels. Visitors are greeted by a half flight of steps and elevator rising to the main sales area. Both levels are finished with wood flooring.

On the first level, Apple has arranged contemporary Avenue display shelving set in plaster walls around six tables. The finished design is a curious combination of elements from Apple’s latest stores, classic locations, and the building’s own utilitarian style. Last-generation display tables and a paneled ceiling textured by a pattern of tiny perforations have been implemented. The floor plan doesn’t allow space for a video wall or Today at Apple Forum. 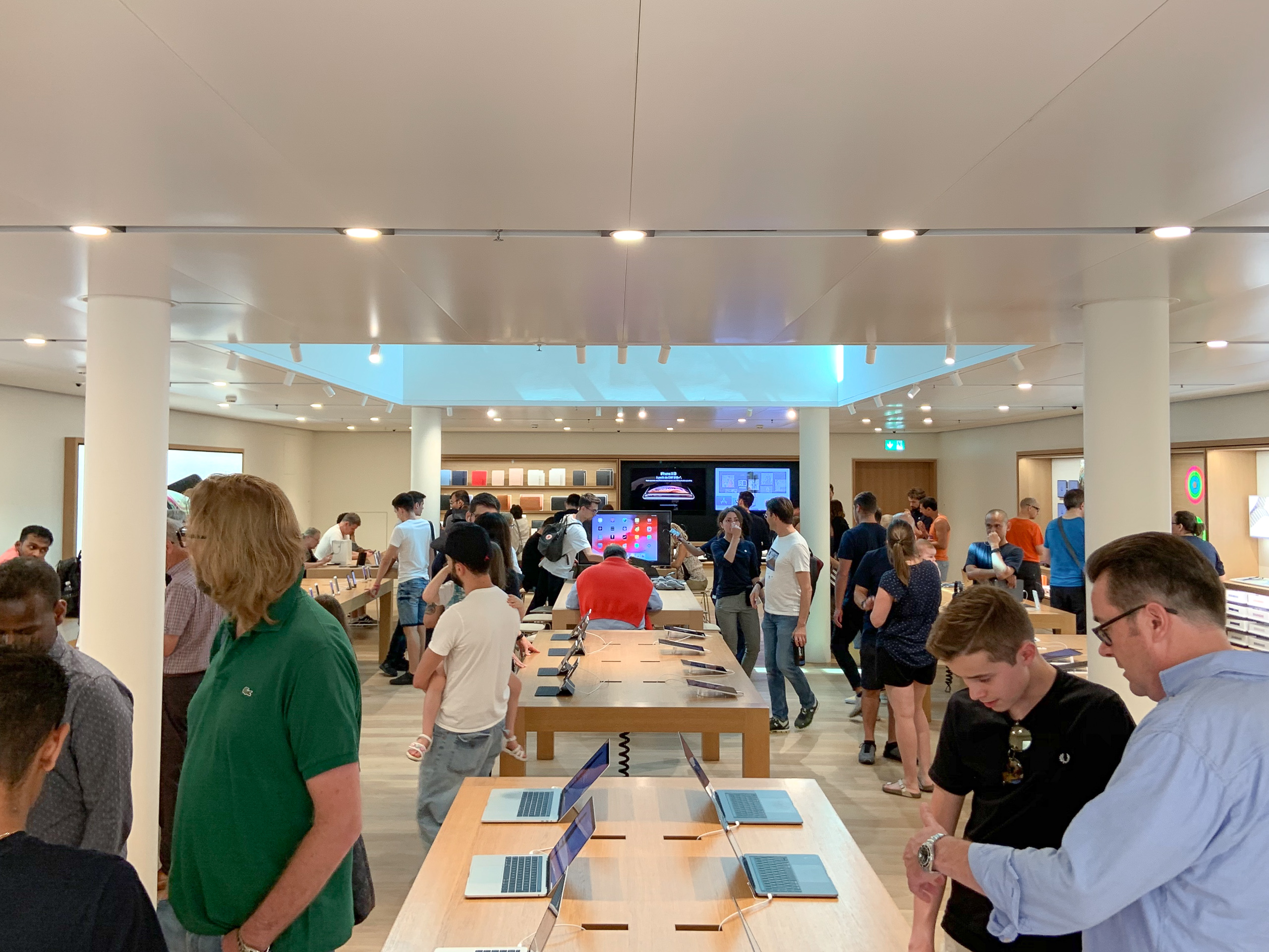 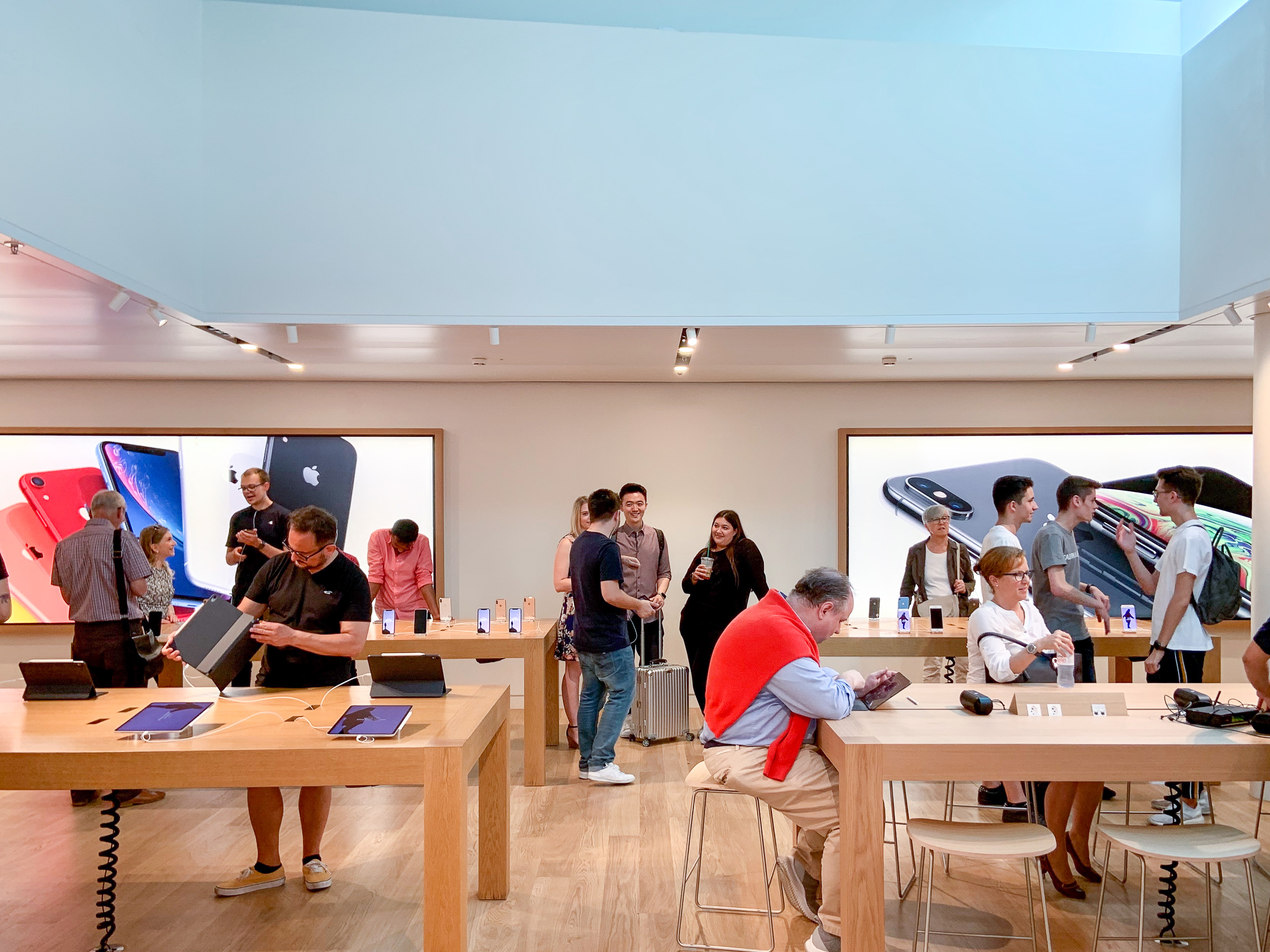 A similar layout and style has been carried to the larger second floor, this time punctuated by a square skylight. Generous amounts of natural light certainly make the space look more inviting than the underground level at Apple Bahnhofstrasse. More Avenues and support tables border the skylight.

Beyond Rennweg, two of Switzerland’s three other Apple Stores are still waiting for upgrades. Apple Glattzentrum added a video wall and Forum for Today at Apple in May, but Apple Rue de Rive and Freie Strasse are still in the cards for remodeling or replacement.