North Korea technology company Ryonghung has recently released a new tablet using the trademarked name of Apple’s popular device, the iPad. The company’s tablet is called the “Ryonghung iPad” and lets users read the news, work on documents, and perform other actions across more than 40 different pre-installed apps (via Gizmodo).

Tech specs for the Ryonghung iPad detail a device with 1GB RAM, an 8GB hard disk, a quad-core 1.2GHz processor, HDMI compatibility, a keyboard, and “network connection” capabilities. The advertising material details a few apps as well, relating to programs like a calculator, a health encyclopedia, a medical app, and an agricultural program. 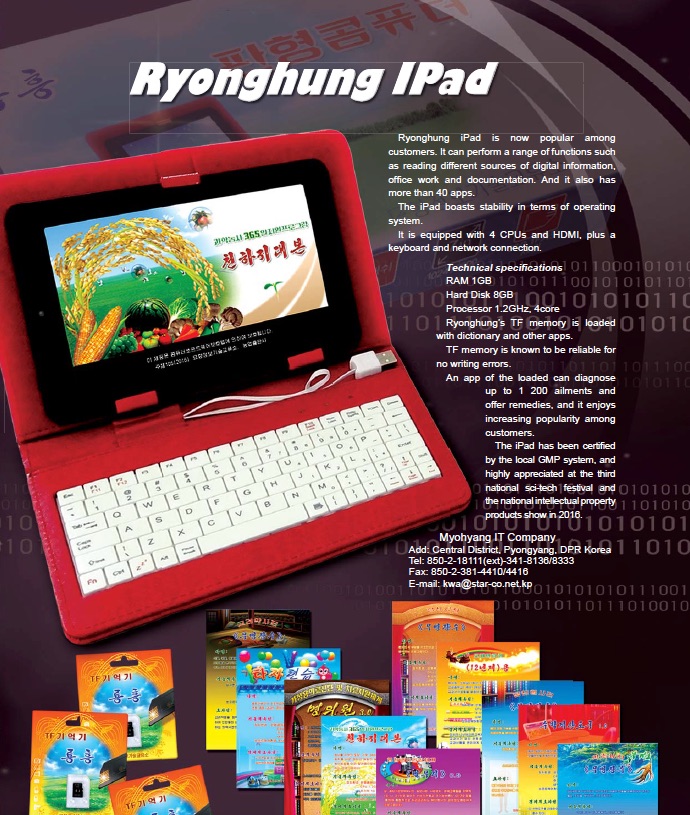 As NK News pointed out, the heavy use of “iPad” in the device’s marketing material violates Apple’s trademarks.

A North Korean company is advertising a domestic tablet computer under the copyrighted name of one of Apple Inc.’s flagship products – the “iPad” – the DPRK’s latest edition of Foreign Trade magazine shows. The term “iPad” is registered as an Apple trademark on its website and while there are occasions when the company’s terms can be used, these generally need Apple’s authorization.

A different version of the Ryonghung iPad first appeared in North Korea in 2013, although then it lacked the “iPad” moniker and was called the “Ryonghung-trademarked tablet computer” by the media. North Korean versions of Apple devices have been seen in the past, with a computer bearing resemblance to the iMac showing up at a trade fair in Pyongyang in 2015. Created by a company called Blue Sky, the computer was an all-in-one device with an aluminum finish, black bezels, and white keyboard and mouse accessories.

Similarly, in 2014 reports surfaced of North Korea’s “Red Star” Linux operating system and its overall resemblance to OS X at the time. The Red Star OS included a similar dock, wallpapers, tool bar, and more visual similarities to Apple’s MacBook and iMac computer operating system. However, the Ryonghung iPad appears to be the first device launched out of North Korea that directly uses Apple branding.

Apple was asked if it would enter a trademark dispute with the North Korea-based company over the iPad brand, but a representative of the Cupertino company has yet to respond.

Note: Due to the political nature of the discussion regarding this topic, the discussion thread is located in our Politics, Religion, Social Issues forum. All forum members and site visitors are welcome to read and follow the thread, but posting is limited to forum members with at least 100 posts.
Discuss this article in our forums