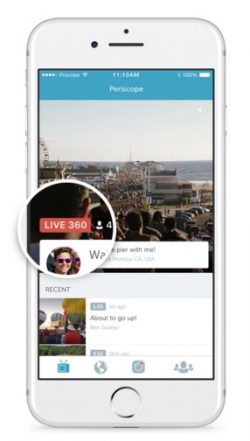 The change means that iPhone users with compatible 360-degree camera equipment, such as the new Samsung Gear 360, can broadcast immersive video feeds of their entire surrounding environment.

As a broadcaster, 360 video allows you to spend less time and energy on framing your shot so you can focus on adding new dimension to your viewers’ experience. In 360 broadcasts, viewers will be able to look anywhere while also having the broadcaster present to anchor the broadcast.

If a Periscope broadcast is marked with a “Live 360” badge, viewers can change the point of view by moving their phone or tapping and scrolling around the screen.

Periscope has published a Live 360 broadcasting guide here. Users will need to have downloaded the latest version of the iOS app to broadcast in 360. Periscope is a free app for iPhone available on the App Store. [Direct Link]