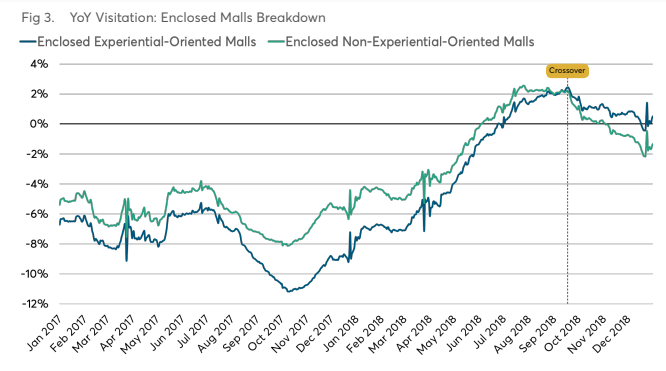 New data out today about retail store closures in the US shows that “experiential” tenants like Apple and Tesla aren’t driving consumer traffic to malls like landlords expect.

As reported by CNBC, analytics firm Thasos says that foot traffic at US malls has been dropping since last August, except for a small uptick during the holidays. Meanwhile, data from Coresight shows that almost 6,000 retail stores have closed so far in 2019, more than the amount during all of 2018.

“This suggests [real estate investment trusts] are overpaying to bring in Tesla and Apple, and others, in order to drive foot traffic to the property,” Collins said.

As noted by 9to5Mac’s Michael Steeber, while Apple’s flagship stores in major city centers have been refreshed with a more experiential focus (Today at Apple, display walls, etc.) a large percent of Apple Stores are ten years old or more.

As for Tesla, it is in the middle of a chaotic restructuring of its retail store strategy. Last month it closed 29 locations in the US and Canada, but then froze the process closures and layoffs.

Angela Ahrendts: ‘Incredible’ flagship stores in the pipeline, Today at Apple has been ‘absolutely huge’ – 9to5Mac