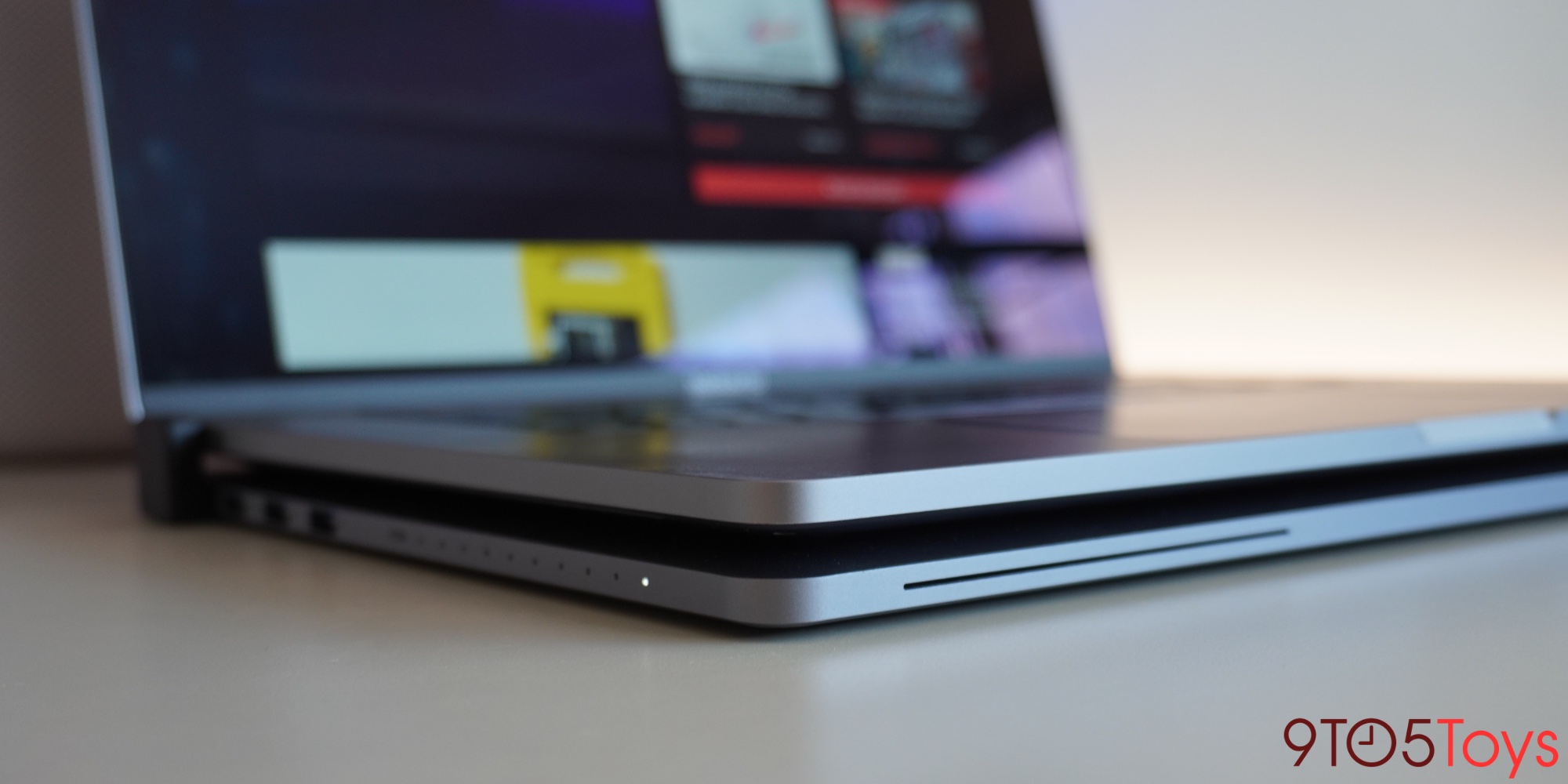 After being in the making for quite some time, Linedock is finally shipping. We first got a look at the new accessory at CES 2020, where I was impressed by the prototype they showed off. Now, a year and a half later, the USB-C dock arrives with plenty of notable features to match its unique design. Today, we’re taking a closer look to see how it all stacks up. Head below for a closer look and first impressions with the new Linedock for 16-inch MacBook Pro.

To catch everyone up to speed, Linedock set out to deliver a USB-C hub that differs from the usual model on the market by delivering an under-Mac design. The slim hub carries the same footprint as the 16-inch MacBook Pro that it’s a companion to, and matches it with a Space Gray metal design.

Linedock then backs its unique form factor with plenty of features that go far beyond the usual duties of a USB-C hub. Notably you’ll find HDMI and DisplayPort outputs alongside two extra USB-C ports, three USB 3.1 Gen 2 slots, and pair of SD card readers. But that’s only the half of the story you can see from the outside.

Peaking into Linedock delivers two notable features that continue its precedent of straying from the norm in the best possible sense. First up, there’s an internal SSD that can be configured at up to 2TB for some additional USB-C storage built right into the hub. And to make full use of the accessory’s larger footprint, you’ll find a built-in a 99.9-Wh (27,000 mAh) battery that’s capable of dishing out 100W of power to your 16-inch MacBook Pro.

All of that stacks up in order to deliver one of the more feature-packed MacBook accessories on the market at any price point. To match its capabilities, though, you are looking at a starting price tag of $479, which only goes up, depending on how much storage you’d like included.

I’ve had the pleasure of taking the Linedock for 16-inch MacBook Pro for a spin over the past few weeks and it’s been exactly that, a pleasure. For full context, Linedock fits almost too perfectly into my workflow, which has made getting to test it out even more of a plus. Throughout all of the setups I’ve shared in the past, the one consistency is that I always use my MacBook as the main screen, with one or more monitors flanking it for some extra real estate.

Linedock fits in with this setup better than any other huh or docking station I’ve used in the past and offers the most streamlined workstation I’ve had in years. That’s largely due in part to all of the display outputs and charging input being centered around the back, but it’s under-Mac design also means I’ve been able to eliminate the ergonomic stand that’s been a staple on my desk for quite some time.

But enough about why it’s ideal for me and more about its overall perks. For staters, Linedock delivers on its USB-C hub capabilities with ample I/O. It’s not the most diverse selection on the market, but the team behind the accessory has struck a good balance between having the ports you’ll actually use and forgoing the ones that are just included to run up the feature sheet.

It’s also just as compelling of an upgrade to your mobile setup as it is for in the at-home office. Even though working from the coffee shop hasn’t been on the table lately, it’s also another use case at which Linedock will excel. The built-in battery ensures you can stay untethered from the wall for longer work sessions, and the 100W fast charging feature also ensures it can quickly juice up your iPhone and other gadgets alongside the 16-inch MacBook Pro.

Then there’s the actual build quality, which is right on par with the overall feature set. With these being in production for so long, you can tell that the delay was well worth the wait, as all of the dimensions are zeroed in on being as close to that of a 16-inch MacBook Pro as possible. There’s also the fact that there’s easy access inside, should you want to check out the internal craftsmanship.

Now for everything that Linedock does do well at, there are some aspects that aren’t as ideal. With the accessory being able to dish out 100W of power to your 16-inch MacBook Pro and packing a battery of its own, the hub gets hot on heavier loads. While thermals have been a hot topic of conversation in the Mac space for a long time, the relevance here is one area where those who rely on heavy workloads.

I personally never experienced thermal throttling throughout my testing, though my workload isn’t exactly the most taxing. If you rely on a MacBook Pro for intense video editing or anything of the sorts that maxes out the performance of your machine, Linedock might end up pushing the thermal envelope a bit too far.

On the subject of getting the absolute most out of your machine, one of the other drawbacks for Linedock is that it’s only capable of dishing out 4K at 30Hz rather than the preferred 40K60. This is certainly far from a dealbreaker in my usage, but those who need the frame rate for their workflows should take note.

And as fully featured as Linedock is, all of those specs come with the trade-off of stacking up to a pretty hefty package. It’s quite slim in the thickness department, but with the same profile as a MacBook Pro, the entire package isn’t exactly lightweight. That’s all fine and dandy for use at the desk, but it makes for less compelling laptop usage.

Still, only small blights on an otherwise healthy spec sheet that over the past few weeks of testing has actually delivered on its promises.

At the end of the day, Linedock delivers a near-perfect 16-inch MacBook Pro companion. Whether the under-Mac design or its impressive list of features catch your eye, it’s an easy recommendation for those whose wallets can swallow the higher-end price tags.

Some will see a $479 entry-level price as a nonstarter, but for anyone wanting to pair their premium machine with an accessory built specifically to match, there’s no need to look further. I’m not sure if Apple themselves could build a USB-C hub as compelling as Linedock. And if they did, I bet it would have the same attention to detail as you’ll find here.

The only other thing holding Linedock back from achieving full must-have status is that we still don’t know what form factor the rumored M1 MacBook Pro will end up taking. Even if the dimensions don’t even up being identical down to the last millimeter, there is some solace in knowing that it’s fully compatible with M1 machines already. So no matter what machine you upgrade to down the line, Linedock will still be compatible so long as there’s USB-C/Thunderbolt connectivity.

At the end of the day, the value proposition presented here makes complete sense in my book and fully delivers. Instead of buying a bunch of individual accessories that provide a piece of the perfect MacBook setup puzzle, Linedock streamlines it all into a single package.

While there is an abundance of more affordable docks on the market, I don’t think you’ll find one that’s as capable as Linedock. It can do it all, and all of it quite well, too. You’ll rarely find a jack-of-all-trades in the tech world that actually ends up being a master of them all, which is why Linedock earned a lasting place on my desk to complement my 16-inch MacBook Pro.