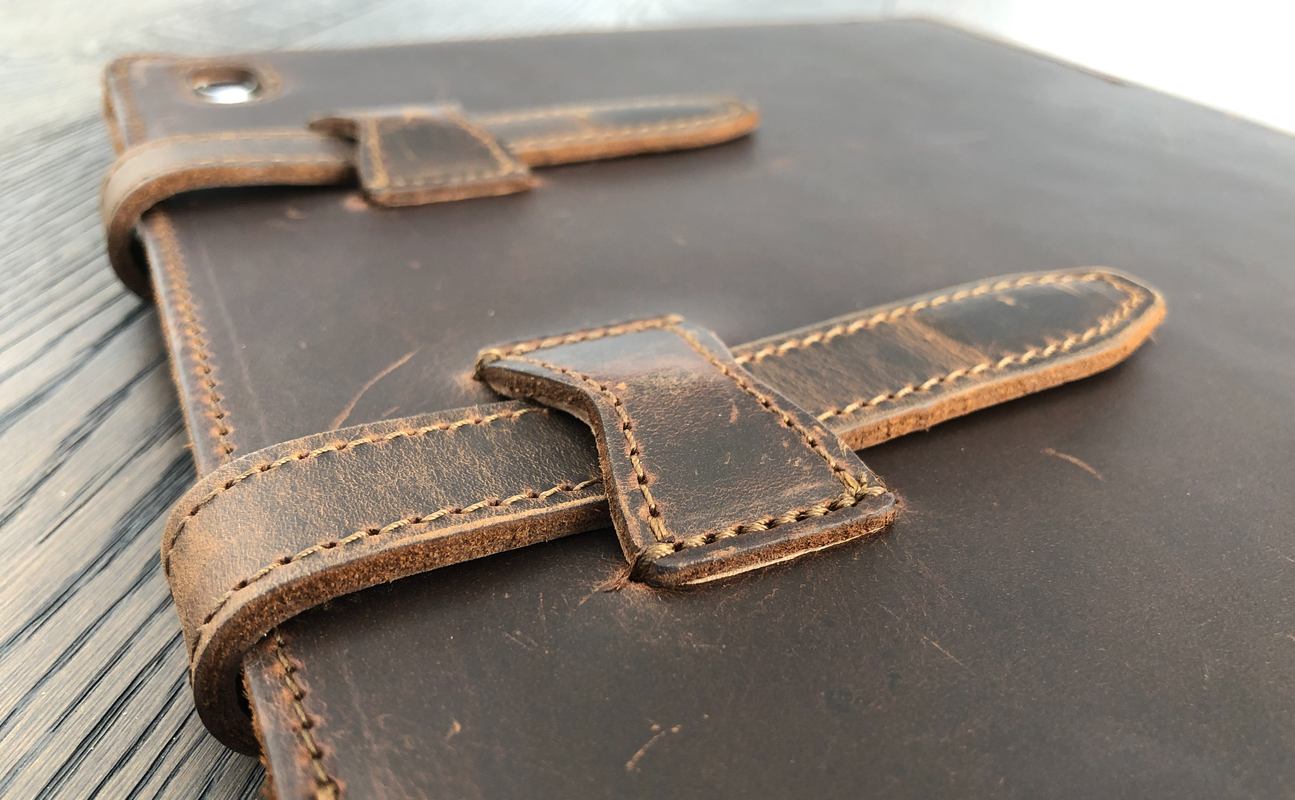 Apple’s products have been something of a boon to the premium leather industry. There’s a significant overlap between those who appreciate the aesthetics of Apple devices, and those who find leather a beautiful material – in both cases, willing to pay a premium for a quality product.

That’s something Apple itself has exploited, of course. Apple will happily sell you a variety of leather accessories for its products, from a Pencil Case through iPhone covers to sleeves for iPad and MacBook Pro.

I first encountered Saddleback Leather when one of its leather backpacks caught my eye. And part of what made it stand out was the company’s 100-year warranty – which applies to all its products.

So when Saddleback announced a leather sleeve for the latest 11- and 12.9-inch iPad Pro models, I decided to check it out. I tested the 12.9-inch one.

I enjoy both. Apple, unsurprisingly, went for the sleek look (though doesn’t yet offer one for the 11-inch or new 12.9-inch models). Saddleback, in contrast, is all about the traditional look.

It’s not just looks you’re choosing between here: there are trade-offs involved. Apple’s sleeve is more compact, so takes up less space in a bag, but offers a limited degree of protection. The Saddleback sleeve is chunkier, but offers much greater protection – and also doubles as a stand.

The Saddleback sleeve looks like a very traditional leather folio case. It’s a solid piece of full-grain cow leather, which is even thicker than boot leather. It’s secured by two thick leather straps.

The leather is available in three colors: Chestnut, Dark Coffee and Tobacco (shown).

There’s a cutout for the camera – on which more shortly – and heavy-duty stitching. The leather is reasonably stiff (but not rigid) and smooth to the touch. It’s also water-resistant, though not waterproof. 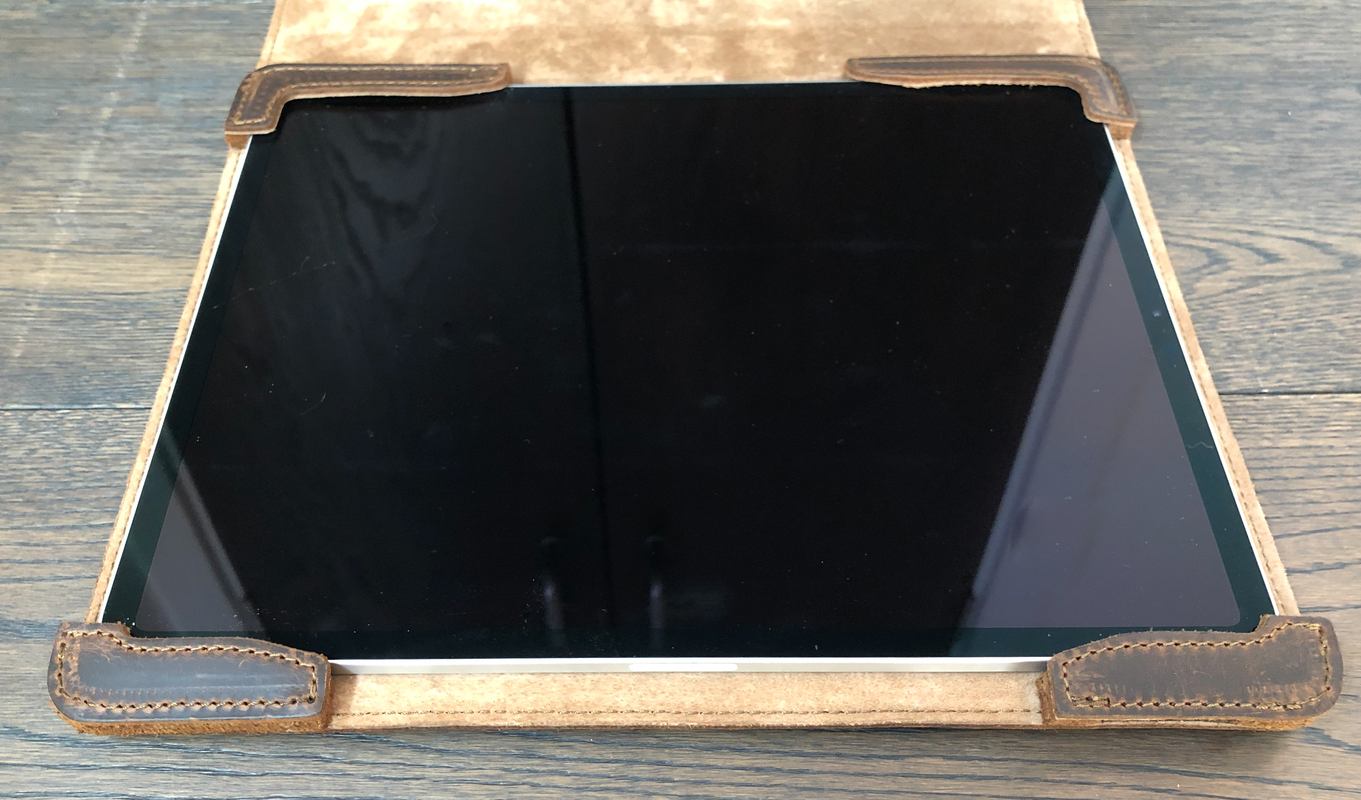 Open it, and inside is a beautifully soft pigskin lining. There are four very heavy-duty leather corners to hold the iPad. The company says there’s some trade-off between protection and accessibility, and it prioritised protection. I think you’d have to be very unlucky indeed to damage your iPad while it’s in this case, even if you dropped it onto concrete.

One thing I’ve noticed before about this type of leather: it is very prone to scratching. Personally, I don’t mind at all – I view it as all part of the beauty of leather – but if this bothers you, you can stop reading here.

Though wiping with a damp cloth does reduce the visibility:

You can insert and remove the iPad easily enough: the downside is the accessibility of the power and volume buttons. I found it was easier to slip it out of the corner to use the buttons than to try to get my fingers through the gaps provided. Saddleback says the 11-inch version is easier to access.

The straps hold the sleeve very securely closed, and there’s room for the Apple Pencil to remain attached, the straps providing added reassurance that it’s not going anywhere. (Yes, I did end up buying the Pencil, but that’s a story for an iPad Pro Diary update shortly.)

The sleeve can also double as a stand. Fold the sleeve back on itself, and the straps fed back into their slots to hold it in a V shape. 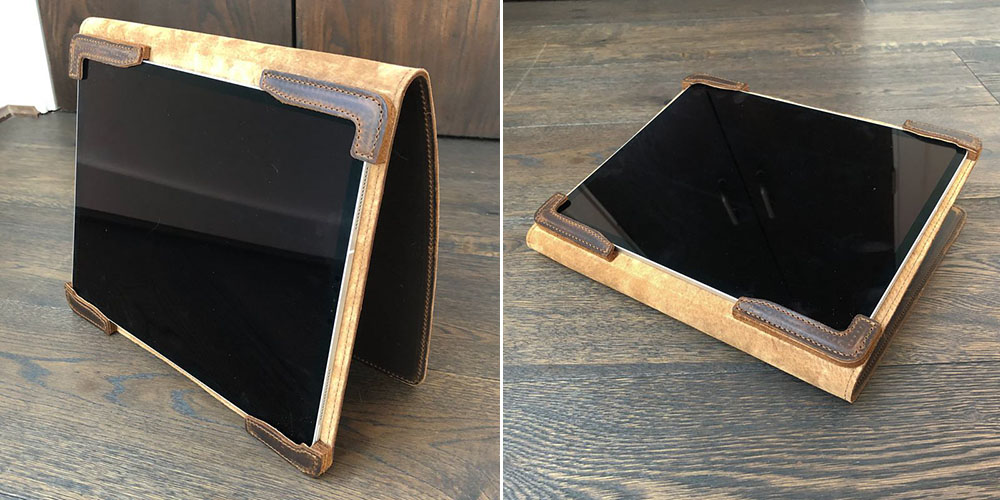 You can use it horizontally, to angle it on a desk, or vertically – for watching video, viewing photos or similar.

Horizontal orientation does put it at a comfortable angle for typing, but it is very slightly bouncy. Not much, and it’s fine for casual typing like emails, but I wouldn’t want to write any long-form pieces on it.

In vertical mode, it sits very nicely on a table for viewing.

One thing that strikes me as overkill on both Apple’s Folio Case and this one is the camera cutout.

It’s really rare I use the rear camera of the iPad at all, and if I do, it’s not going to be inside the case. So I honestly think both Apple and third-part companies could omit the camera cutout.

If you use your iPad for serious amounts of writing, you’re going to want a hardware keyboard. The Brydge keyboard is my choice, but there are those who carry Apple’s Magic Keyboard – so Saddleback offers a $59 sleeve for this.

Like the iPad sleeve, this is made from the same cow leather and the same soft pigskin lining on the inside. It has a large flap, and a simple wrap-around strap to secure it.

It’s perhaps a little overkill. If you’re carrying both iPad and keyboard, you’re probably putting them into a bag, and personally I don’t think the keyboard needs much protection – especially as this sleeve does add a fair amount of bulk. So while it’s cute, I think it’s really a solution in search of a problem.

One other thing to note: this is currently only available in Tobacco, so you’ll want to order the iPad sleeve in the same color if you want them to match.

The Saddleback sleeve costs $119 for the 11-inch iPad, and $129 for the 12.9-inch one. This isn’t cheap, but does compare favourably to Apple pricing.

It is, though, quite a different beast. If you’re always going to carry your iPad in a bag, and just want a sleeve to protect it from scratches, you’d be better off with the Apple one. If you ever carry the iPad on its own, however, as I sometimes do, then the Saddleback offers a lot more peace of mind.