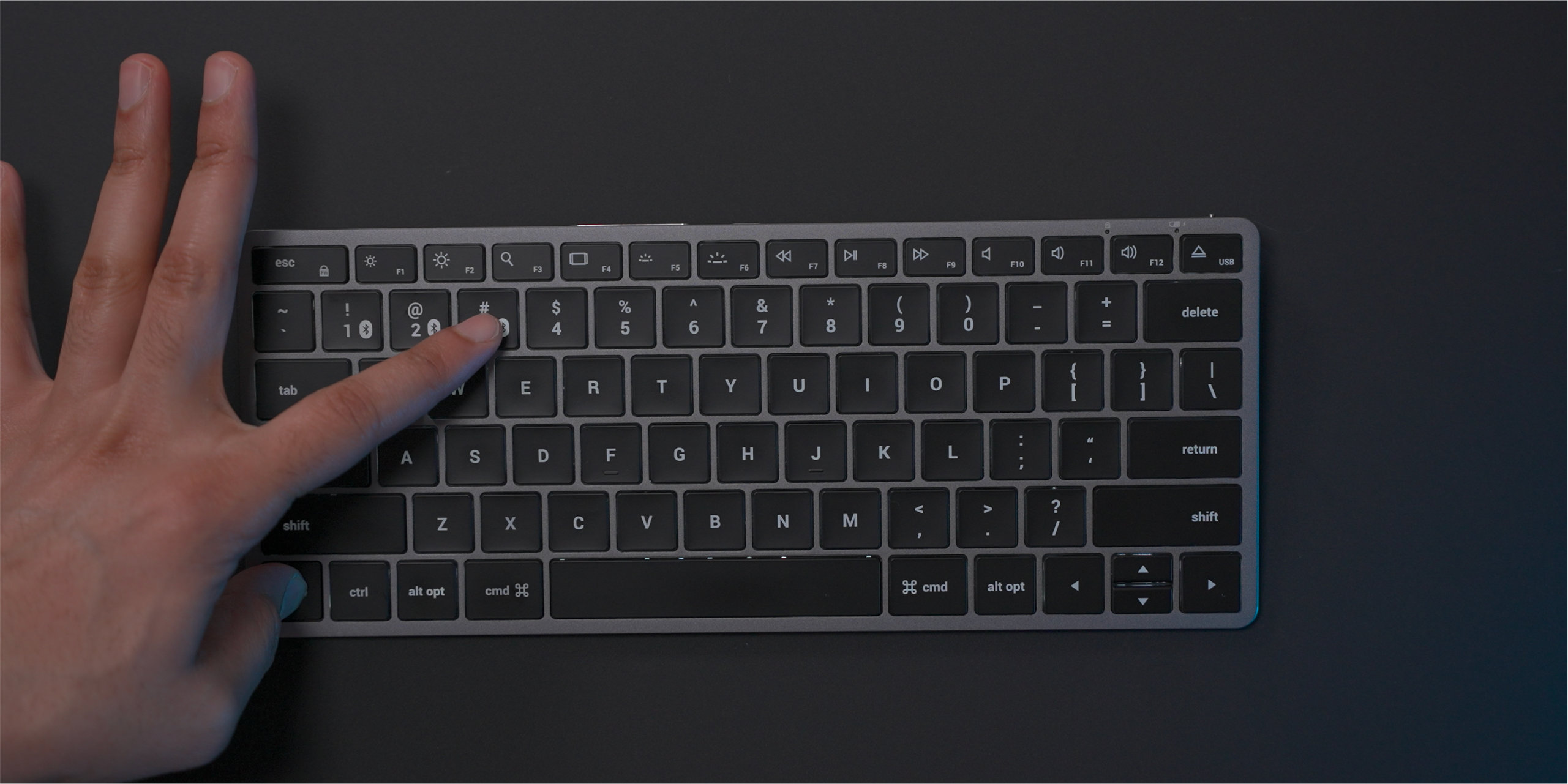 I’ve been using the Satechi Slim X1 Bluetooth keyboard full-time for the last three weeks, and it’s proved to be a solid companion for both my Macs and iPads. Should you consider purchasing it? Watch our hands-on Satechi Slim X1 review for the details, and be sure to subscribe to our YouTube channel for more video reviews.

As someone who normally uses the Keychron K2 mechanical keyboard for day-to-day typing tasks, the Satechi Slim X1, with its scissor-switch low-profile keys, is a big departure from what I’m normally used to. However, because the Slim X1 feels similar to Apple’s Magic Keyboard, it didn’t take long before typing on it felt natural.

Although I like the look of the space gray anodized aluminum paired with the black keycaps, I quickly remembered how much black keys show fingerprints, grease, and dust. Using the Slim X1 made me appreciate the relatively low maintenance white keycaps found on Apple’s Magic Keyboard.

Like the Magic Keyboard and other Apple-centric third-party offerings, the X1 includes shortcut keys that are intended to be used with macOS and iPadOS. There are shortcuts for adjusting display brightness, invoking Spotlight search, CMD+Tab interface, and transport controls for interfacing with music playback. Unfortunately, the unit doesn’t feature the handy T-style arrow key layout, instead opting to go with the layout used on Apple’s Magic Keyboard.

One of the biggest benefits of the Satechi Slim X1 is its backlit keys, a feature that’s still not available on Apple’s wireless Bluetooth keyboards. Unfortunately, the unit lacks an ambient light sensor for automatic backlight brightness adjustment, a feature seen on M1 MacBooks, and third-party offerings like the Logitech MX Keys, but the backlight’s 10 levels of brightness can be controlled directly via two buttons in the keyboard’s shortcut row.

When set at higher brightness levels, the backlighting tends to bleed around the edges of the keys, which makes the keyboard look unkept when compared to the backlit keyboards found on Apple’s latest MacBooks. It’s a shame that Apple doesn’t offer its own first-party keyboard with modern conveniences, because I feel like they’d sweat the smaller design details third-party companies like Satechi tend to miss.

Of course, the integrated backlight is one of the biggest draws on the battery. Here is how Satechi reports battery life relating to the Slim X1’s various backlight levels:

The Power indicator light (above the Eject key) will flash green when the keyboard is low on battery. Recharging the Slim X1 via the USB-C connection takes about 2-3 hours. Once fully recharged, the red charging light will turn green. Satechi says that the total standby time is 13 days, and the total working time is 45h of usage. I’ve used the Slim X1 heavily for three weeks, between three different devices, with the backlight set to Level 3 most of the time, and I’ve only had to charge it once.

My favorite thing about the Satechi Slim X1, when compared to Apple’s own Magic Keyboard, is the ability to quickly switch between three devices. For people who use iPads as a secondary device, it’s a huge convenience. Because the Slim X1 lives up to its name and is relatively portable, I find that it makes a great iPad Pro and iPad Air companion for those that haven’t already settled on the Magic Keyboard for iPad.

A simple long-press of one of the three Bluetooth buttons along with the Function key will place the device into pairing mode. Once paired with your devices, it’s just a matter of pressing the Bluetooth button + Function key combo to quickly switch between a Mac, iPad, iPhone, etc. Outside of the backlight capabilities, this is the biggest reason to choose the Slim X1 over the Magic Keyboard.

Included with the unit is a USB-C charging cable for recharging the Slim X1’s internal battery. The USB-C cable, or any USB-C cable for that matter, can be used to put the Slim X1 into wired mode so that you can connect directly without Bluetooth. Wired mode is enabled automatically when a USB-C cable is connected, but you can toggle between the Bluetooth and wired modes by pressing one of the Bluetooth keys or the Eject key (combined with the Function key) to switch back to wired mode.

Like the Magic Keyboard, the Satechi Slim X1 Bluetooth keyboard lacks integrated feet on the bottom to lend users a higher typing angle, but Satechi includes optional rubber riser feet that are mounted via 3M adhesive, for those desiring the higher angle. It’s not the most glamorous solution, and it’s not as flexible as integrated feet, but I’ve found that it works well enough.

While the Slim X1 controls brightness levels just fine on a MacBook or iPad, I was disappointed to find that the brightness control shortcut keys on the Satechi Slim X1 don’t communicate with Apple’s Pro Display XDR. Both the Magic Keyboard and even third-party offerings like the Keychron K2 (v2) work perfectly fine controlling brightness for Apple’s pro-oriented display. I’m not sure if this is something that can be addressed, but I’ve reached out to Satechi for comment.

It’s a shame that Apple doesn’t upgrade its Magic Keyboard with a more modern feature-set. Products like the Slim X1 show just how good a first-party Apple keyboard could be if updated with modern conveniences.

At any rate, the Slim X1 is a solid Magic Keyboard alternative for users that want a product that’s very similar to what Apple offers, yet is available with conveniences like backlit keys, USB-C charging, and multi-device connectivity. With good battery life and a solid aluminum design, it’s hard to go wrong with the Slim X1, especially when considering that it’s $29 cheaper than the Magic Keyboard. Satechi also sells a full-sized version of its keyboard, the Slim X3, complete with a 10-key number pad.

What do you think? Do you have a favorite third-party keyboard that you use? Sound off in the comments with your thoughts.