Microsoft today introduced an enhanced, all-new version of Skype for iOS and Android devices that puts an emphasis on chats, chatbots, camera features, and its own version of Snapchat’s Stories. The update comes with an overall change to Skype’s visual design as well, with the company stating that it’s decided to focus on allowing personal user choice to dictate how sections of the app look, including the ability to customize the app with your favorite color.

Skype’s home screen now sits with a “Chat” window on launch, and users can easily swipe to the Camera and new “Highlights” feature, which is an extended version of Stories. Here, users can take a picture or video, decorate it with emojis and text, and then post it to their Highlight. After posting, content is available for a full week instead of just 24 hours, and only users who follow you can see your Highlight. Specific individuals and groups can also be sent a Highlight before it’s posted. 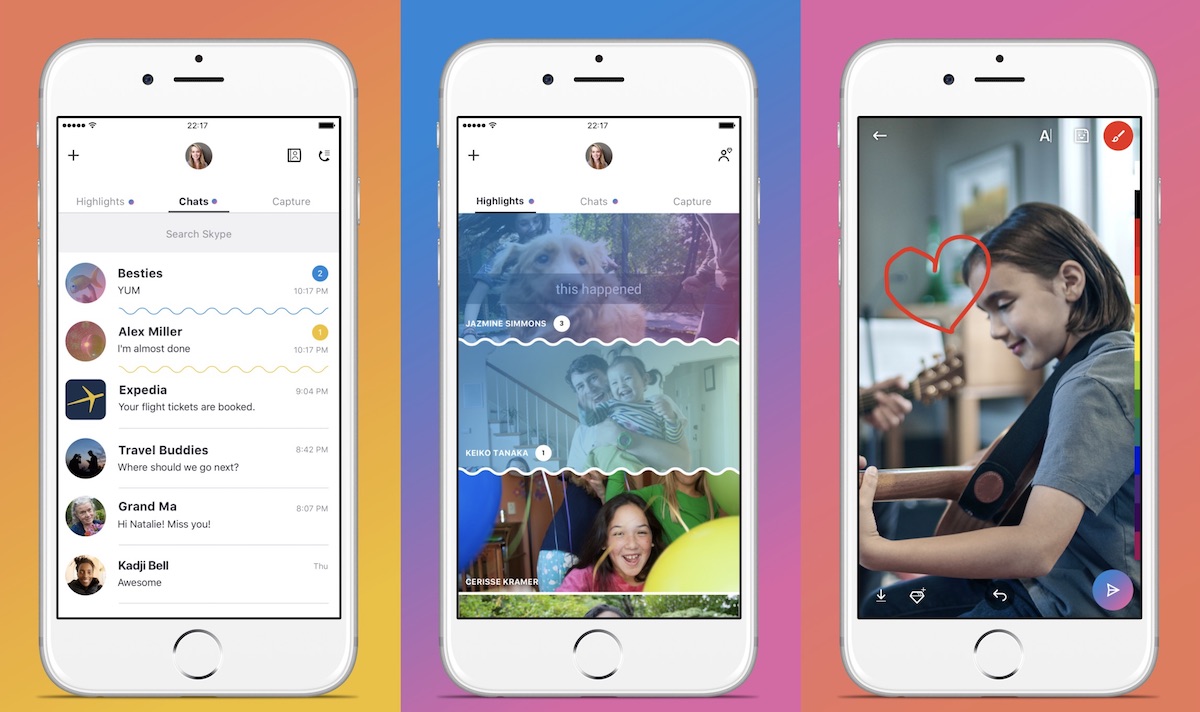 Skype has also introduced Facebook-like reactions to both chats and Highlights, allowing users to select emojis to react to messages, pictures, and videos without having to text. In a talk with TechCrunch, Skype didn’t balk at admitting it was inspired by Snapchat Stories, pointing out Facebook’s own argument that the “Story” model is a format that can be used by anyone in the industry and isn’t owned by Snapchat.

Highlights are Skype’s own take on Stories – something the company readily admits. “It’s like Facebook has said,” says Amritansh Raghav, Corporate Vice President of Skype, referencing remarks made by Facebook’s VP of messaging David Marcus, who recently argued that Stories “is definitely a format, the same way the feed is a format.”

Raghav agrees. The feed is now commonly used in a range of apps – even those that aren’t personal social networks, like Microsoft’s business communications service Yammer. “There’s a new medium that has risen,” he says of Stories. “When you think about this new way of interacting, [we want that to be] available also in this application.”

Less emphasized in the update are Skype’s traditional video call features, although they have received a few overhauls as well. Users will now be able to send large emojis over video chats, as well as text messages, stickers, and photos that appear as an overlay on the screen. Skype said that in the future it plans to introduce gaming features into video calls and the ability to synchronize and watch streaming videos together, rumored to begin with videos from YouTube, similar to Google’s own UpTime app.

The Skype update launches on Android first today, and is set to roll out to iOS devices in about a month. Mac and Windows devices will receive the update sometime within the next few months.