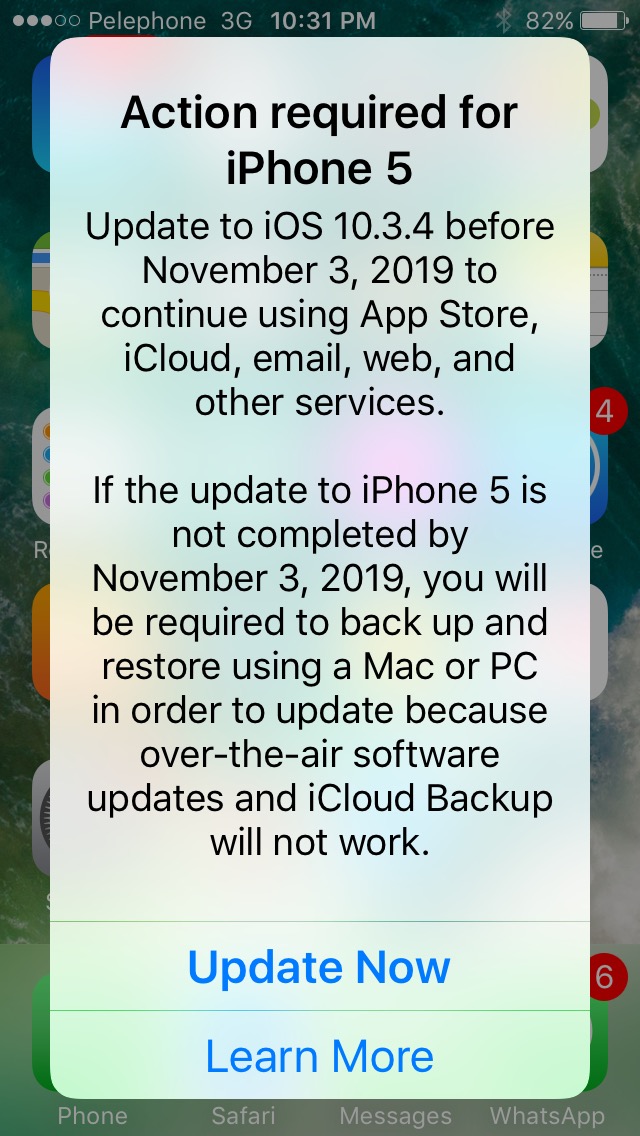 You may remember that, back in July, Apple released rare bug-fix updates for older versions of its operating system: iOS 10.3.4 and iOS 9.3.6. This was necessary to help keep older iPhones and iPads maintain accurate location functionality as the GPS network goes through a time rollover transition.

However, the problem is even more serious for iPhone 5. Apple is sending out alerts to iPhone 5 owners that their phones must be updated to iOS 10.3.4 before November 3. If the iPhone 5 is not updated in time, it will be unable to connect to the internet entirely, including web browsing in Safari, email, iCloud and App Store services.

iPhone 5 owners are seeing this rather hilariously-tall dialog appear on their phones to make them aware of how critical doing the update is. Apple has also released a support document to explain the details further.

This issue is specific to the iPhone 5, which was last sold in September 2013. To keep the phone functioning normally, update to the latest iOS 10.3.4 update before November 3.

If you miss that date, OTA updates and iCloud backup will no longer be possible as the phone will not be able to connect to the network. In that case, you will need to connect to a computer and restore with iTunes on a PC or Mac.

The GPS bug will begin impacting Apple hardware like the iPhone 4S, iPad 2, iPad with Retina Display, and the fourth-generation iPad just before midnight UTC time on November 3. For those devices, not updating means that GPS features will stop working. For the iPhone 5, the consequences are much more severe.

To update to the bug-fix release, simply go to Settings -> Software Update.