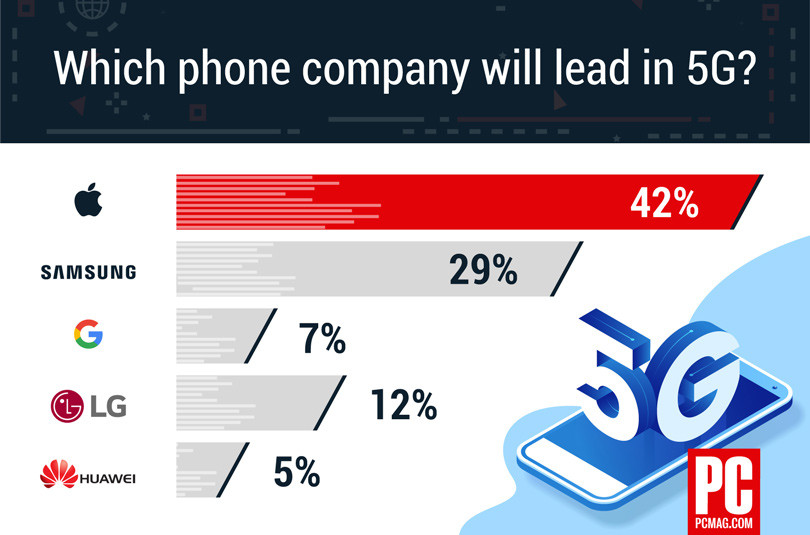 5G is definitely coming soon, that much we know. However, most consumers seem confused as to what exactly the benefits of it are, when it’s coming, and which manufacturers to expect it from first. If you’re a little fuzzy on 5G, read up why you should be excited about 5G right here.

Meanwhile, a new study from PCMag shows that most American consumers are awfully confused about which brands are leading the way for 5G.

According to the survey, nearly half (42%) of respondents believe Apple yields the greatest advantage in the race for 5G, with Samsung in a moderately distant second at 29%.

Although rumors have swirled that Samsung is planning an ultra-high end smartphone for its upcoming Unpacked 2019 event to launch alongside the standard Galaxy S10 and S10+ that features 5G support, finding 5G network support is going to be an even greater challenge altogether.

As for when 5G modems hit the standard Galaxy S line, users will probably have to wait an extra year at the very least.

While some carriers are pushing for 5G launches in 2019, it’s already becoming abundantly clear 5G won’t reach the hands of average guys and gals until 2020.

Reports from last year corroborate this, alleging that Apple has already made the decision to skip the next-generation wireless service in the upcoming 2019 iPhone lineup, instead saving the debut for 2020.

LG and Google round out the 3rd and 4th place spots at 12% and 7%, respectively. Interestingly though is that Huawei, which comes in at last place with only 5%, has already announced a 5G foldable smartphone set for launch later this month.

PCMag throws in one final interesting tidbit regarding Android to Apple switchers.

Only 11 percent of iPhone owners surveyed said they would switch away from the iPhone for 5G.

Whether this is because consumers don’t yet understand why they should care about 5G, or whether patient loyalists don’t mind waiting an extra year for 5G remains speculation. In my opinion, it’s because most consumers simply don’t know why they’ll want 5G yet.

Would you make the switch from iPhone to Android just for 5G, or would you be willing to wait until 2020? Let us know in the comments section below!