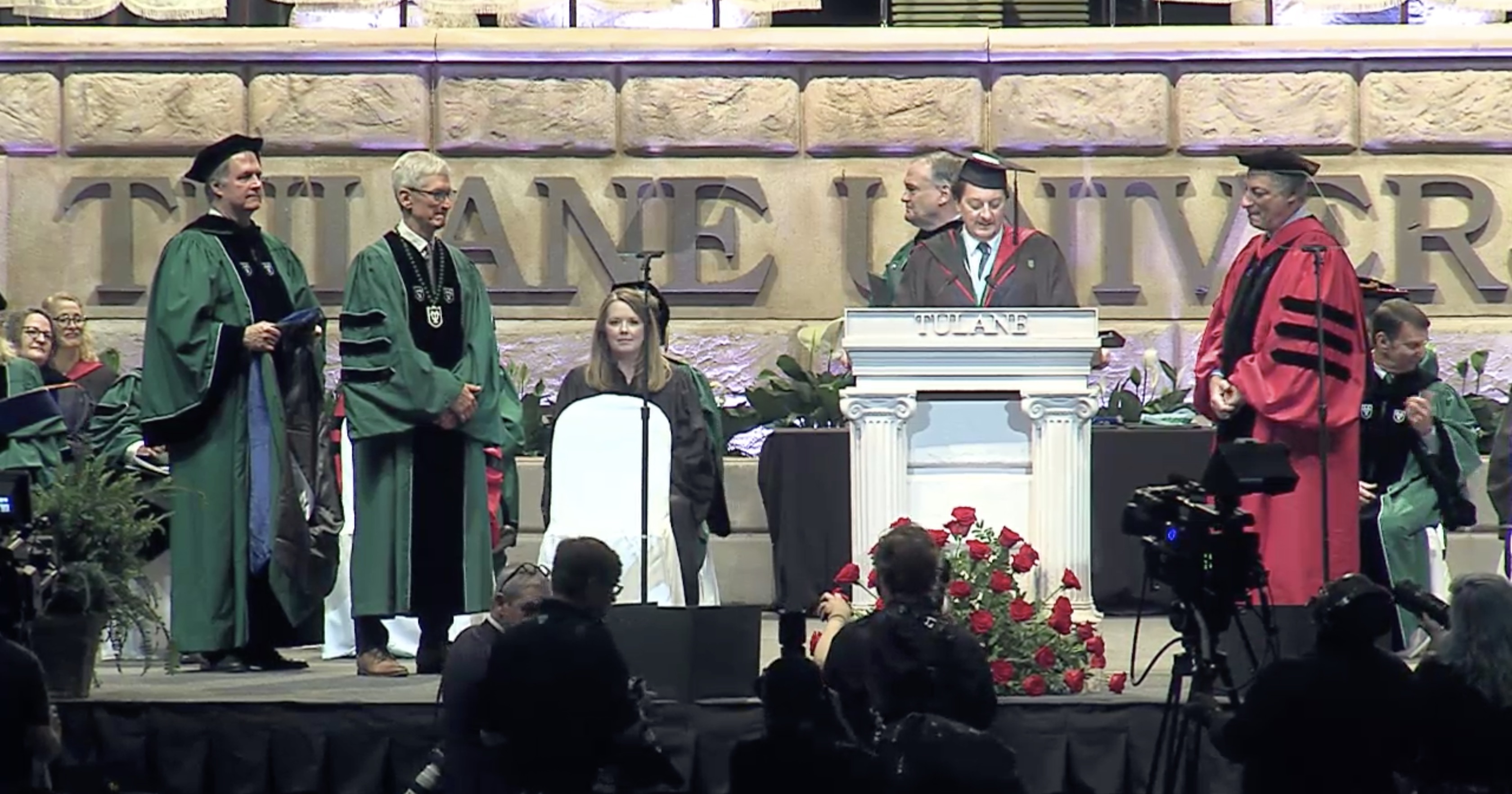 As announced back in February, Tim Cook today delivered the commencement address for Tulane University at the Mercedes-Benz Superdome in New Orleans. During his speech, Cook told the story of his journey to Apple, talked about climate change, and encouraged the Tulane graduates to make a difference in the world

Prior to his speech, Cook was awarded an honorary degree from Tulane. The Apple CEO was praised for transforming “Apple into the archetype for success and innovation in the realm of technology.”

Cook opened his speech by calling on the Tulane graduates to be more open to others, and recognize the problems that others face:

“In a world where you obsessively document our own lives, we don’t pay attention to what we owe each other. It’s about recognizing human civilization began when we realized we could do more together. That the threats and danger outside the flickering firelight got smaller as we got bigger. That we could create more prosperity, beauty, and wisdom when we acted collectively.”

Building on that, Cook elaborated on the story of how he originally came to Apple, invoking Steve Jobs’ commitment bringing powerful technology to more people. Cook explained that at the time, he had a stable job at Compaq, which seemed like “it would be on top forever.” Apple, on the other hand, was on the verge of bankruptcy:

“I had a comfortable job at a company called Compaq, that at the time looked like it was going to be on top forever. As it turns out, most of you are probably too young to remember its name. But in 1998, Steve Jobs convinced me to leave Compaq behind and join a company on the verge of bankruptcy. They made computers, but at that moment at least, people weren’t interested in buying them. Steve had a plan to change things. It wasn’t just about the iMac or the iPad, it was about the values that brought these inventions to life. The idea that putting powerful tools in the hands of everybody can move society forward.

We can build things that help us imagine a better world, then make it real. There’s a saying that if you do what you love, you’ll never work a day in your life. At Apple, I learned that that is a crock. you’ll work harder than you ever thought possible, but the tools will feel light in your hands.”

Cook then shifted the conversation to an issue that he has spoken about before: climate change. Cook said that in many ways, his generation was failed the graduates of Tulane. Cook noted that when it comes to climate change, it doesn’t get easier based on who wins an election. He also pointed out that “we don’t build monuments to trolls, and we’re not going to start now. ”

In some important ways, my generation failed you.

“We spent too much time debating, too focused on the fight and not enough on progress. You don’t need to look far to find an example of that failure. Here today, in this very place, in an arena where thousands once found desperate comfort from a hundred-year disaster, the kind that seems to be happening more and more frequently, I don’t think we can talk about who we are as people without talking about climate change. This problem doesn’t get easier based on who wins an election. It’s about who has one life’s lottery and has the luxury of ignoring this issue, and who stands to lose everything. The costal communities, including some right here in Louisiana, that are already making plans to leave behind the laces theyve called home for generations and head for higher ground. The fishermen whose nets come up empty.The wildlife rs

These are poeple’s homes, their livelihoods. The land where their grandparents were born, lived, and died. When we talk about climate change, I challenge you to look for those who have the most to lose and find the real, true emphathy that comes from something shared. That is really what we owe one another. When you do that, the political noise dies down and you can feel your feet planted on solid ground. We don’t build monuments to trolls and we’re not going to start now.”

Cook concluded his speech by encouraging the Tulane graduates to build a better world for future generations, and make a change and focus on the major problems facing society:

“Be motivated by your duty to build a better world. Young people have chagned the course of history time and time again. Now it’s time to change it once more. I know the urgency of that truth is with you today. Feel big, because no one can make you feel small. Feel brave because the challenges are great but you are great. Feel grateful, because someone sacrificed to make this moment possible for you. Here in this stadium, I can feel this courage. Try something. You may succeed, you may fail. Make it your life’s work to remake the world. There is nothing more beautiful than working to leave something better for humanity.”

Next on the docket for Cook is Stanford University’s graduation next month. Cook is set to deliver the commencement speech for Stanford on June 16th at Stanford Stadium. Cook’s speech at Tulane was live streamed on the university’s website and can be rewatched below.