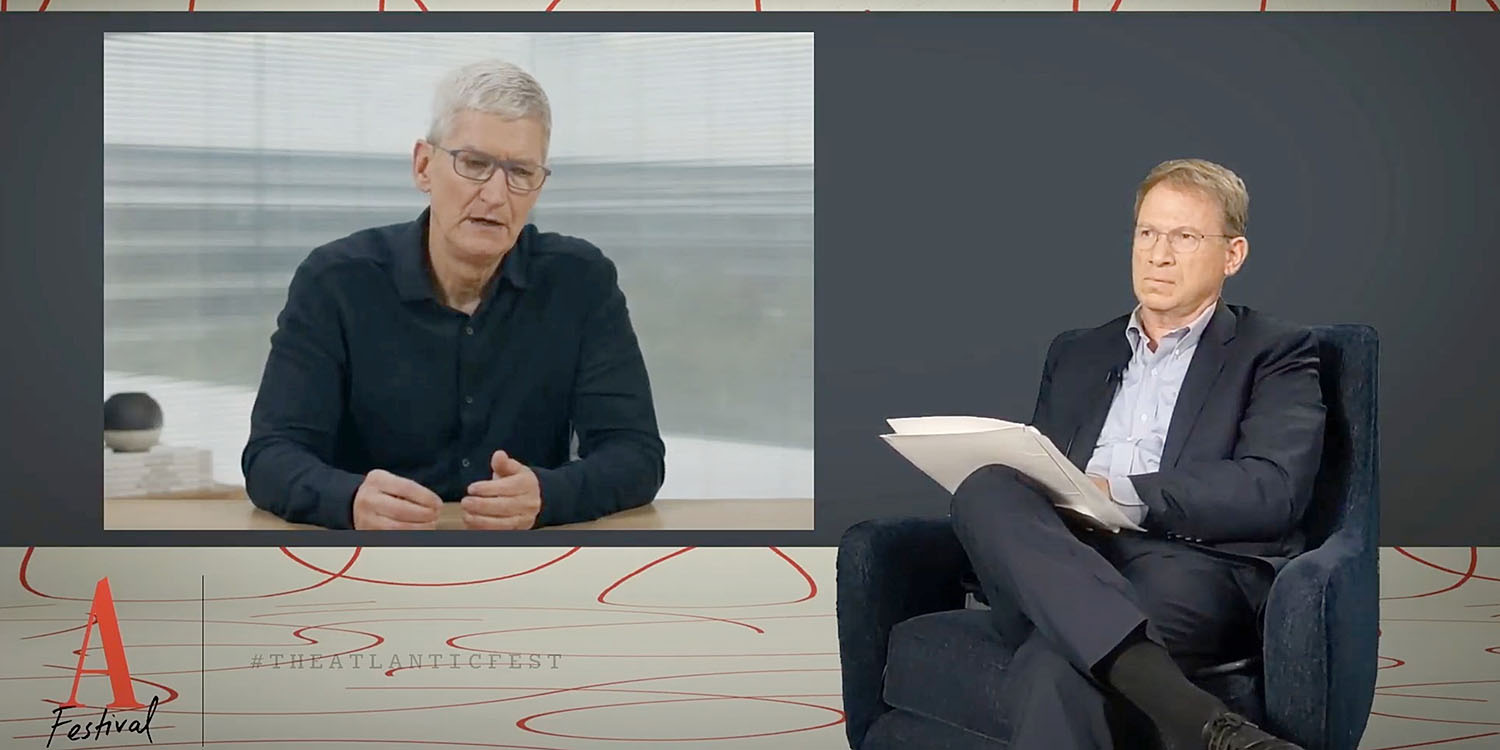 Apple CEO Tim Cook has been remotely interviewed for the opening night of The Atlantic Festival, speaking about the congressional antitrust investigation, privacy; his differences with the Trump administration; and how Apple is coping with the coronavirus lockdown.

On antitrust, Cook said that big companies like Apple ‘deserve scrutiny,’ but denied that the company has any kind of a monopoly …

Asked for his take on being called to testify before Congress on antitrust issues, Cook said he had no objection.

I think that big companies deserve scrutiny. And I think that’s not only fair but important for the system that we have in America. And so I have no issue at all in Apple being put underneath the microscope and people looking and probing.

Cook went on to argue that Apple had no monopoly, but addressed hardware, which has never been raised as a concern, rather than discussing the App Store.

My hope is that as people continue to hear our story, that it will become as apparent to them as it is to us, that we have no monopoly, there is no monopoly here. We’re in very, very competitive markets like smartphones and smartwatches and tablets and personal computers. These things are fiercely competitive.

There are basically street-fights for market share, and our strategy, our core strategy as a company, is to make the best, not the most. And that basic strategy will never produce a monopoly because it’s rare, almost impossible, for the best to become the most as well. Someone will choose a commodity product, and there’s enough people that buy the commodity product that it will have more share. That’s true in all of the different fields we’re in.

So I’m hoping that people heard that, and heard how we conduct ourselves, because it’s very important to us. We always do what we believe is right, and conduct ourselves with the utmost integrity and professionalism. I hope that came across, and that we can sort of unpeel from this investigation.

The other huge concern with tech companies is of course privacy, and Cook was naturally keen to stress Apple’s position on this – and to make the point that it saw the potential issues before most companies or governments had even thought about it.

We see privacy as a basic human right, very fundamental human right. And from our point of view, if you look at it from a U.S. perspective, it is the foundation of which other freedoms exist.

And so forever, it’s not something that I began, but since Apple was founded, we’ve always worried about people’s privacy. Because we saw the day, not exactly how it played out, but we saw that the digital world had the capability to destroy the privacy. And so I know we’ve been a bit on an island. There are more people coming on the island which I’m very happy about, but we’ve made a set of different choices than some other companies have made.”

Cook was also asked about the wildfires in California, and whether that had helped him change Trump’s mind on the threat of climate change. Apple’s CEO didn’t answer the question, but did repeat his view that it’s always better to engage.

I believe that it’s much better to be involved, whether you’re in agreement on an issue or I think it’s even more important to engage when you disagree on something. And so what we do at Apple is we focus on policy. We don’t focus on the politics. And so it keeps us out of the sort of the daily scrum of politics and keeps us very focused on the things that are very important to us.

He said the environment is ‘very important’ to Apple, as is DACA, the Deferred Action for Childhood Arrivals. This is an Obama immigration policy which provides a route to a work permit for those who were illegally brought to the US as children, and who have lived all their adult lives in the country. Trump has been trying to phase out DACA, which triggered opposition from Apple and other tech companies with DACA employees, as well as multiple lawsuits.

DACA is very important for us. We have over 400 employees that are in the company and they are here on DACA. And my view is pretty simple on this, is they’re every bit as an American I am. And I want to see them taken care of and I’d like this cloud to be lifted that’s been hanging over them.

On the coronavirus crisis, Cook said that Apple was a very collaborative company, so he really wanted to get most people back into the office, but did say that some things would continue to be done virtually.

In all candor, it’s not like being together physically. And so I can’t wait for everybody to be able to come back into the office.

I don’t believe that we’ll return to the way we were, because we found that there are some things that actually work really well virtually. But things like creativity and the serendipity that you talk about, these things, you depend on people kind of running into each other over the course of a day.

We have designed our entire office such that there are common areas where people congregate and talk about different things. And you can’t schedule those times. And so I think the vast majority of us can’t wait until we can be back in the office. You know, hopefully that occurs sometime next year, who knows exactly what the date may be.”

You can watch the interview here: