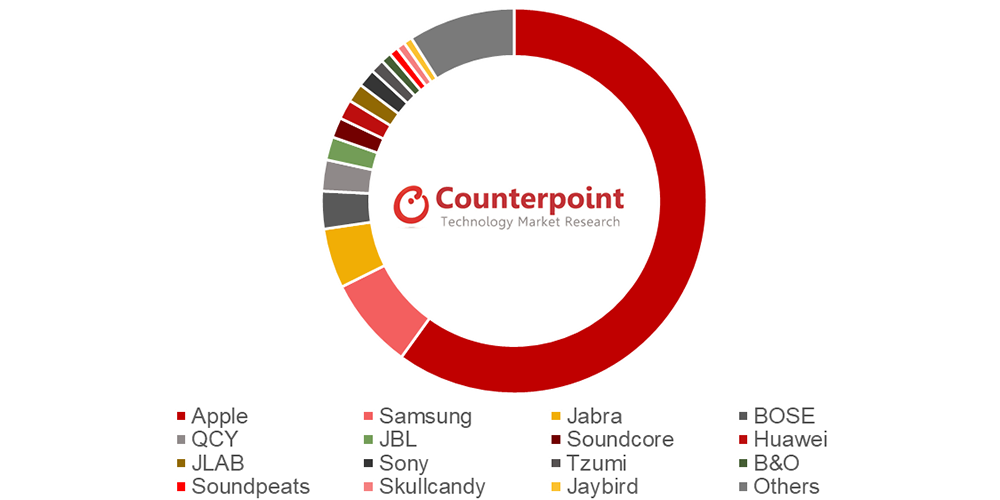 Counterpoint Research is out with its latest market sizing report for the true wireless hearables sector, and there’s a mix of good news and bad news for Apple.

The good news is that AirPods continue to dominate the market …

Counterpoint doesn’t share exact numbers in its public information – it wants companies to pay for the report – but the graphs below tell their own story. Apple has well over half of the total share, and when it comes to individual models, there is AirPods and then everything else.

The bad news for the Cupertino company is that you’d have expected the second-gen model to have boosted Apple’s share, but that hasn’t happened.

Apple’s market share remained at the same level seen in the last quarter, failing to grow in spite of the launch of its second generation AirPods. While sales of the first generation AirPods were higher than expected thanks to a variety of sales promotions for stock-outs in the channel in Q1 2019, sales of the new model were weaker than initially expected due to the market’s mixed response.

Close Apple watchers may be waiting for the 3rd-gen model, one of which is expected to feature an all-new design.

Samsung overtook Jabra for the first time thanks to its latest Galaxy Buds model.

Samsung significantly expanded its market share and ranked the second for the first time by aggressively promoting its new and enhanced model, Galaxy Buds. It is expected to maintain this momentum for a while thanks to the market’s positive response as well as the effect of bundling with Galaxy S10 series.

However, the company may have been buying market share at the expense of profitability: with Samsung, ‘aggressive promotion’ is generally code for ‘slashing the price.’

The market as a whole has grown dramatically in just three months.

The size of the global market for true wireless hearables reached 17.5 million units in Q1 2019, growing 40% quarter-on-quarter (QoQ) […] While all regions continued to grow, North America and Europe were the fastest growing regions.

This has been helped by low- to mid-cost options, with QCY, JLAB, Soundcore, and Tzumi all doing well here. A quick look on Amazon reveals thousands of products, some starting below $10, and plenty of options in the $30-ish range.