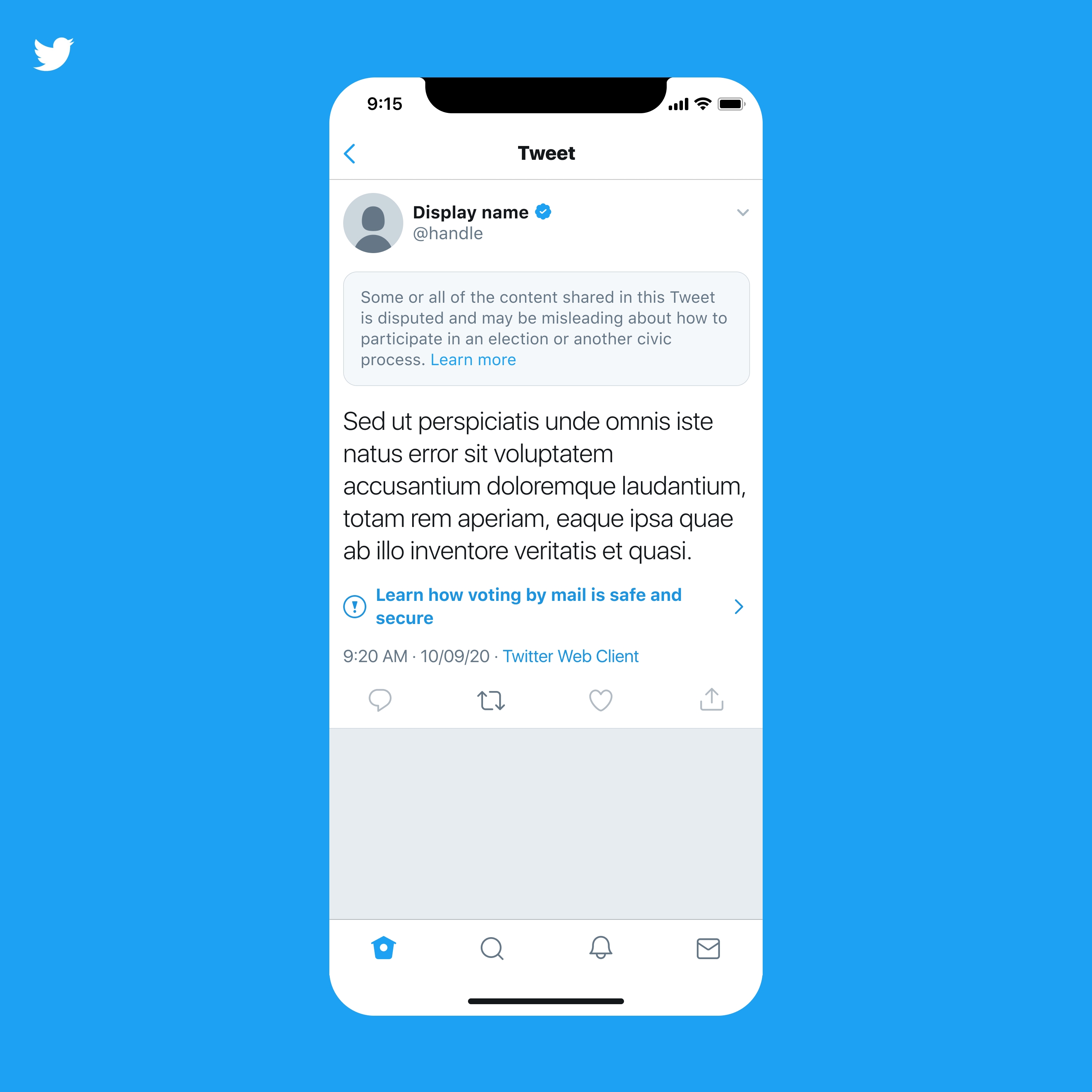 Twitter has announced another round of changes coming to the social network for the November election. In a blog post, Twitter said that it would add new labels to certain tweets, default to quote tweets rather than pure retweets, and more.

First, Twitter says it will add a new warning when a user tries to retweet a tweet that has been labeled with a “misleading information label.”

Twitter is also adding additional warnings and restrictions on tweets with a misleading label when they come from US political figures, US-based accounts with over 100,000 followers, or have gone viral. In these situations, people will only be able to quote the tweet, with features including tweets, replies, and likes being turned off:

People must tap through a warning to see these Tweets, and then will only be able to Quote Tweet; likes, Retweets and replies will be turned off, and these Tweets won’t be algorithmically recommended by Twitter. We expect this will further reduce the visibility of misleading information, and will encourage people to reconsider if they want to amplify these Tweets.

Starting on October 20, and continuing at least through election day, Twitter says it will encourage people to quote tweet rather than retweet. This means that when you tap the retweet button, you’ll automatically be taken to the quote tweet composer. This applies to all tweets, not just those with certain labels.

People who go to Retweet will be brought to the Quote Tweet composer where they’ll be encouraged to comment before sending their Tweet. Though this adds some extra friction for those who simply want to Retweet, we hope it will encourage everyone to not only consider why they are amplifying a Tweet, but also increase the likelihood that people add their own thoughts, reactions and perspectives to the conversation. If people don’t add anything on the Quote Tweet composer, it will still appear as a Retweet.

Second, we will prevent “liked by” and “followed by” recommendations from people you don’t follow from showing up in your timeline and won’t send notifications for these Tweets. These recommendations can be a helpful way for people to see relevant conversations from outside of their network, but we are removing them because we don’t believe the “Like” button provides sufficient, thoughtful consideration prior to amplifying Tweets to people who don’t follow the author of the Tweet, or the relevant topic that the Tweet is about.

And finally, the company is making some changes to trending topics:

Finally, we will only surface Trends in the “For You” tab in the United States that include additional context. That means there will be a description Tweet or article that represents or summarizes why that term is trending.

Again, these changes will begin on October 20, though some are already live in beta form for certain users, and run through at the end of election week in the United States. At that point, Twitter will “assess their continued necessity.”