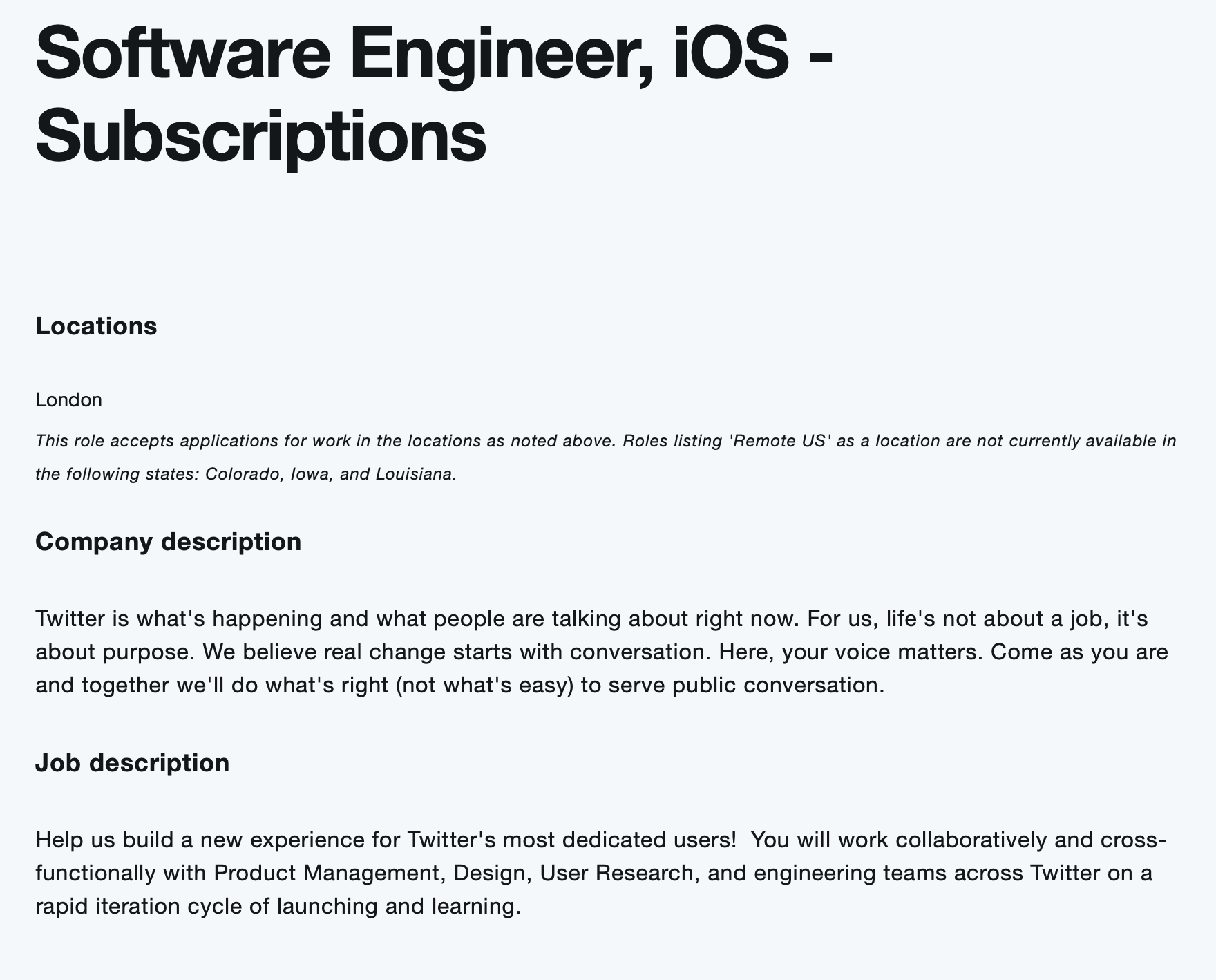 Twitter has posted about half a dozen new open positions for its in the works subscription service, and this time the new roles include two that are specifically for iOS engineers. Last summer we saw Twitter accidentally publicly revealed its new Gryphon team that’s working on a subscription product in a job listing before quickly redacting the mention of a subscription.

Update: We’ve also found subscriptions roles like “Senior Software Engineer, Backend – Subscriptions, positions for Android along with the iOS ones, and more that makes at least two iOS specific ones and 7 newly listed positions now open in total for the Gryphon subscription team.

Will Sigmon first spotted the latest Twitter role that first appeared three days ago (this is an additional job since Simon Størving found a Senior iOS engineer role for Subscriptions earlier this month). Here’s the job description for the new “Software Engineer, iOS – Subscriptions” position:

Help us build a new experience for Twitter’s most dedicated users! You will work collaboratively and cross-functionally with Product Management, Design, User Research, and engineering teams across Twitter on a rapid iteration cycle of launching and learning.

Twitter is looking for candidates in London for this role with 2-10+ years experience in developing iOS apps. Other qualifications include experience with in-app purchases and payments as well as “Previous experience – or enthusiasm to learn about – building products from scratch and building subscription or membership based products.”

As we’ve previously reported, Twitter has done research going back to 2017 into subscription options and it appears from this new open position that the work is ramping up. From our previous coverage:

More details are unclear at this time but Twitter could be working on developing something based on its 2017 research. That looked into interest for a Twitter subscription for power users with deeper analytics, exclusive news, an ad-free experience, and more.

Back then, Twitter was reportedly eyeing a $20/month subscription. Notably, in a 9to5Mac survey, 87% said a paid plan wouldn’t be worth it, while 9% said they’d go for it if it was a more reasonable $5/month.

Other possibilities could include Twitter launching something like a Twitch competitor with purchases unlocking exclusive content. But the idea about Twitter offering editable tweets and other premium features inside a subscription is still floating around.

Twitter says that for now, Gryphon is “a small, scrappy team,” but these latest expansions are certainly notable.

The new Software Engineer, iOS – Subscriptions is live here at the time of writing. You can find all of the open subscription roles by heading to careers.twitter.com and using the search filter.