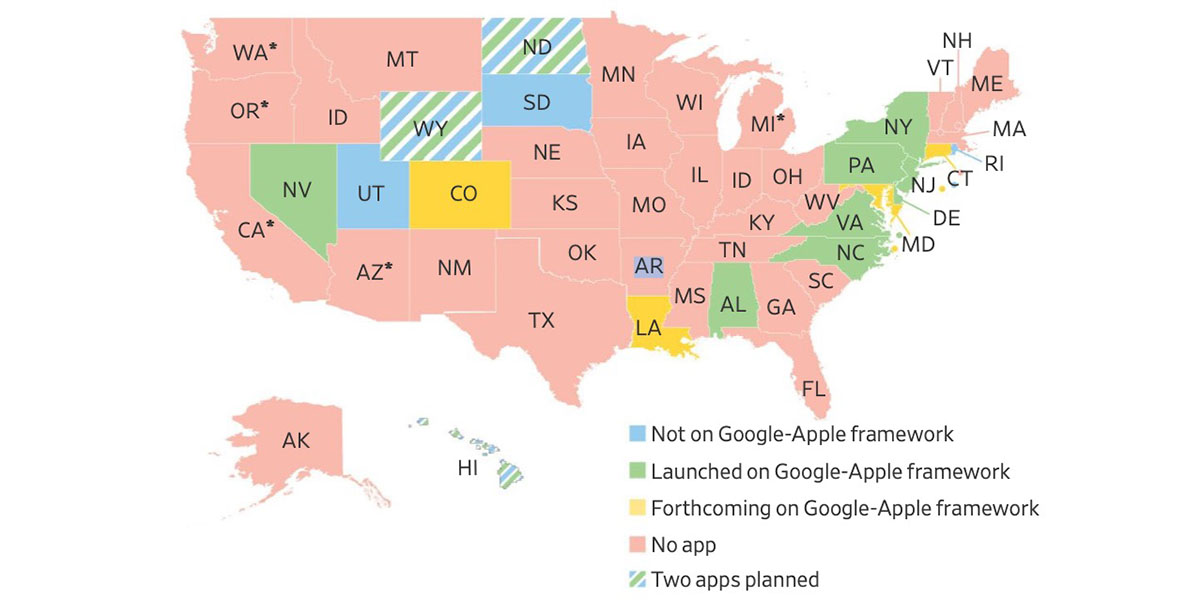 US contact tracing apps are still a mess, says a new report today, despite efforts by Apple and Google to make it as simple as possible for countries and US states to use their API.

We’ve been tracking adoption of the joint Apple/Google API by US states, with just eleven having done so as of our last update at the beginning of the month …

Apple and Google partnered on a project to make freely available to US states and other countries not just an API, but also boilerplate code which would make it a trivial task to create a complete contact tracing app.

Crucial to the coronavirus contact tracing API were eight privacy safeguards designed to ensure that citizens would feel comfortable using the apps, knowing that their identity, movements and meetings remained private.

The tech giants made the first version of the API available on May 20, making it all the more baffling why so few US states have adopted it some five months later.

Apple and Google then went a step further, effectively embedding a complete contact tracing app into their platforms: Exposure Notifications Express. With this approach, all a state or country needed to do was sign-up and provide a handful of details.

Public health authorities simply fill out a config file that includes their name, logo, criteria for triggering an exposure notification, and information and protocol that is displayed to users following an exposure.

A report in the WSJ notes that despite all the work done by the two tech giants, the situation is still a mess.

Months after a burst of optimism about the potential for technology to help track the spread of Covid-19, a hodgepodge of mobile phone apps around the U.S. has yielded unclear results amid inconsistent policies and usage.

Ten states and Washington, D.C., have launched apps that notify users of exposure to infected people through a development framework built by Google and Apple.

Even where states have signed up, they mostly haven’t created inter-operable apps, making them far less effective for those who cross state boundaries.

“If you’re going to have a lot of jurisdictional boundaries that cut through this, it will naturally make the system less effective,” said Eric Rescorla, chief technology officer of Mozilla Corp.’s Firefox web browser.

Four states have, however, commissioned apps made by NearForm, which all work together. This is particularly important for New York and New Jersey.

“You have a lot of cross-border travel,” said Larry Schwartz, who led New York’s app push on the state’s Covid-19 task force. “We have people from New Jersey who work in New York, and vice versa.”

About 1.2 million people have downloaded the NearForm apps across New York, Pennsylvania, New Jersey and Delaware, according to the company and state officials.

But many states have either done nothing at all, or started work on apps but haven’t completed it.

“There is much distrust around contact tracing as it is,” said Nancy Nydam, spokeswoman for the Georgia Department of Public Health.

Attempts to use apps stalled in at least two states after they launched GPS-based tools from local developers in the early months of the crisis.