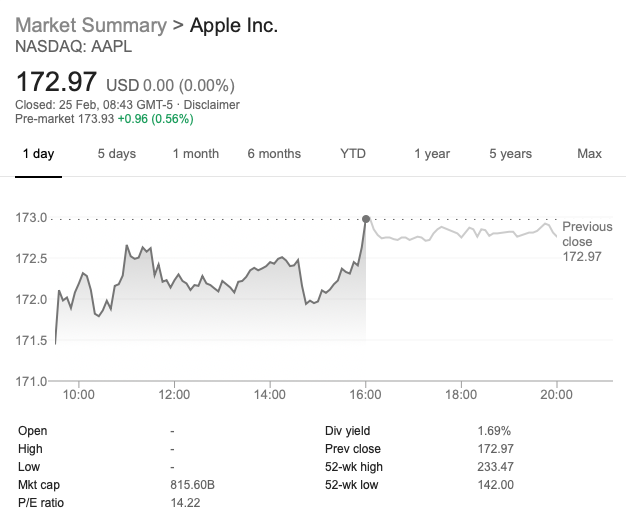 Warren Buffett, through his company Berkshire Hathaway, is Apple’s second biggest shareholder, having dramatically increased his stake in the last few years. In an interview with CNBC, Buffett says that he is unlikely to sell his AAPL shares, and would buy more if it was cheaper.

After becoming the first company to hit a trillion-dollar valuation, Apple stock cratered by as much as 40% as part of a wider market selloff and fears about under-performing iPhone sales. The stock fell another 8% when Tim Cook posted his investor letter, announcing that Apple would miss revenue guidance for the first time in 16 years.

Since then, however, the stock has rebounded to its current ~$173 level as investors look to Apple’s services businesses for ongoing growth.

Buffett’s Berkshire Hathaway owns 249 million shares of Apple, with an average purchase price of $141. This means despite the recent drop, Buffett is profitable on his Apple investments to date. Quoting from today’s CNBC interview:

“If it were cheaper, we’d be buying it. We aren’t buying it here,” Buffett said in an interview with “Squawk Box” co-host Becky Quick. “Apple: I don’t see myself selling – the lower it goes, the better, I like it, obviously.”

Him not wanting to buy more indicates that the company is currently sitting at a fair valuation in Buffet’s opinion. His resistance to selling shows that he is happy with the company’s outlook though.

In the past, Buffett has instructed market watchers to look past short-term fluctuations in iPhone sales and concentrate on the hundreds of millions of customers who live their lives on their phone.