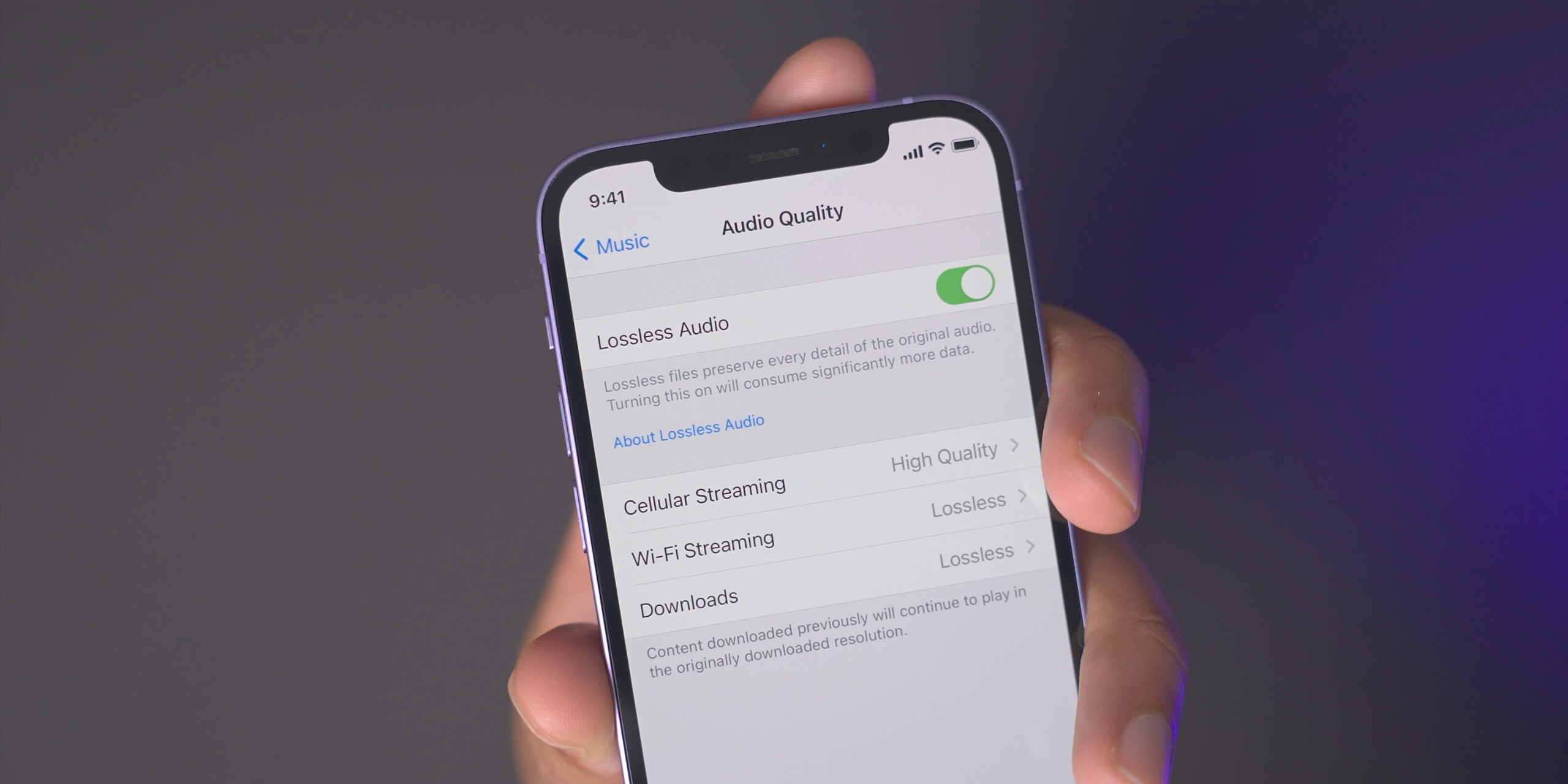 As documented in its release notes, iOS 14.6 includes support for Apple Card Family and Podcasts subscriptions, two service enhancements that will go live once the release goes public. But iOS 14.6 includes several other noteworthy updates, including our first look at updated Music settings for the just-announced Dolby Atmos Spatial Audio and high-quality Lossless audio for Apple Music. The release also gives us our first look at the upcoming Beats Studio Buds, among other things. Watch our hands-on video walkthrough as we consider what’s new in iOS 14.6 RC.

The big news yesterday was Apple’s expected announcement regarding Lossless Audio quality in ALAC (Apple Lossless Audio Codec) across the Apple Music catalog. Apple Music’s Lossless tier begins with 16 bit at 44.1 kHz CD quality, and ventures up to 24 bit at 48 kHz and is natively playable on Apple devices like the iPhone, iPad, Mac, or Apple TV.

As 9to5mac explains, 1:1 Lossless Audio will not be playable on AirPods, which means it will require professional and/or specialist wired headphones to enjoy. Hi-Resolution Lossless, which ramps up the quality to 24 bit at 192 kHz, takes it even further and will require an external DAC (digital-to-analog converter).

In additional to Lossless Audio, Apple is also launching support for Spatial Audio via Dolby Atmos to give users the ability to listen to select albums in an immersive 3D sound stage. Spatial Audio for Apple Music will also launch in June, with thousands of songs gaining support. Spatial Audio will require headphones featuring the W1 or H1 chip, which includes AirPods, AirPods Pro, AirPods Max, and several varieties of Beats headphones.

Several of the preference panels in the Music app settings will be changed in iOS 14.6 once Lossless and Dolby Atmos support launches next month. A new Audio Quality panel will feature a new switch to enable Lossless Audio.

Apple states that Lossless files preserve every detail of original audio, and that turning on Lossless Audio will consume significantly more data, hence the feature isn’t enabled by default, but is opt-in. The good news is that even on cellular connections, users can enable High-Resolution Lossless playback, but Apple makes sure to fairly warn users about the data usage implications.

Another new section that will be found under the Audio heading in iOS 14.6 is the new Dolby Atmos panel. Dolby Atmos playback features three settings in iOS 14.6: Automatic, Always On, and Off.

Automatic will play in Dolby Atmos and other Dolby Audio formats whenever connected to capable outputs like AirPods, AirPods Pro, AirPods Max (when spatial audio is enabled), and supported Beats headphones or Apple devices.

For more information about the new Apple Music enhancements, be sure to check out Benjamin Mayo’s detailed post, and José Adorno’s tidbits post.

iOS 14.6 RC gives us the first look at Apple’s forthcoming Beats Studio Buds. The buds, which are truly wireless and stemless, will feature noise cancellation and will be available in at least three colors: black, red, and white.

Like other Beats earbuds, the Beats Studio Buds feature replaceable ear tips for a more ideal fit and noise isolation. It’s possible that each ‘b’ button on the individual earbuds, which feature a glossy surface, may function as a touch panel for activating features like noise cancellation, and/or interfacing with Siri.

Apple will likely officially announce the Beats Studio Buds to correspond with the release of iOS 14.6 and Apple Music Lossless, which means that we’ll probably see the Beasts Studio Buds arrive in June.

Starting with iOS 14.6 RC, albums ‘Mastered for iTunes’ will now say ‘Apple Digital Master’ instead. This makes sense given that Apple has largely moved on from the iTunes branding.

Along with Apple Digital Master branding, users can expect the aforementioned Lossless and Dolby Atmos branding to appear in the same area for compatible albums in the Apple Music library.

Apple now explains in more detail what happens when the Allow Apps to Request to Track switch is disabled in Settings → Privacy → Tracking. In case it wasn’t previously clear, Apple now states that when this switch is off, all new app tracking requests are automatically denied.

In addition to this updated explainer, Apple also explains why App Tracking is unavailable when users see the switch grayed out. When disabled, a note now explains that this setting cannot be changed because a profile is restricting it, or because your Apple ID is being managed, does not meet the minimum age requirements, or is missing age information.

In addition to these changes and updates, users can expect standard bug fixes, along with the official rollout of Podcast subscriptions, and Apple Card Family support. Although not quite on the level of iOS 14.5 in terms of changes and features, iOS 14.6 is a major update from a services perspective. Once the release goes public later this month or early June, we’ll be sure to publish an in-depth hands-on walkthrough of everything new in iOS 14.6.

What is your opinion of the new Apple Music Dolby Atmos Spatial Audio and Lossless audio features? What about Beats Studio Buds? Sound off down below in the comments with your thoughts.