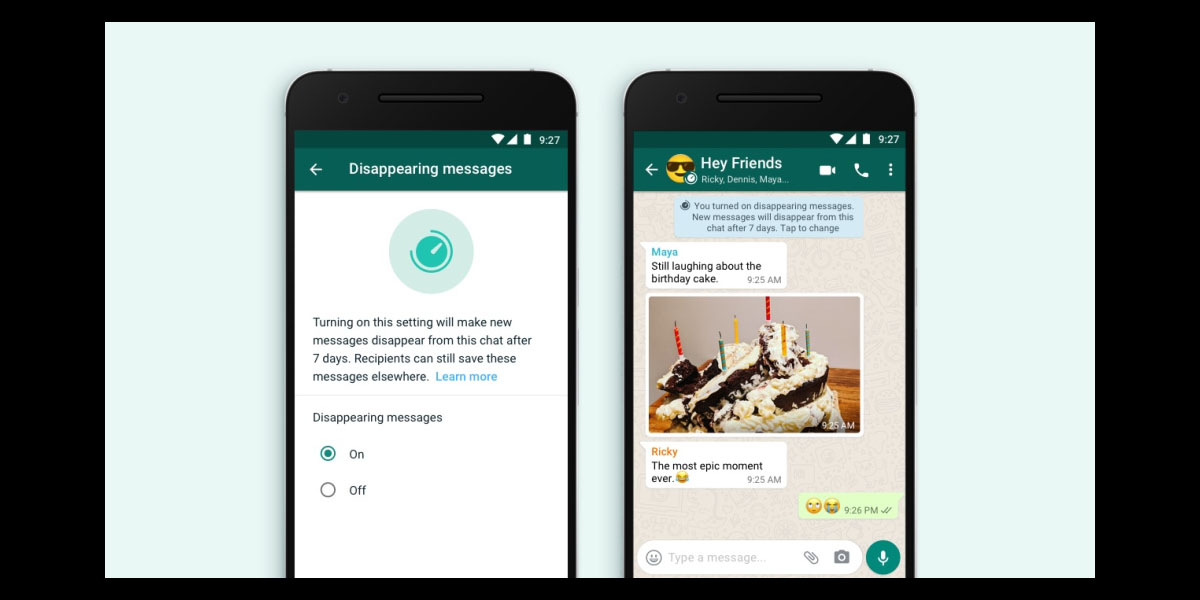 WhatsApp disappearing messages are now rolling out on both iPhone and Android, allowing users to specify that their message should automatically vanish after a set time has elapsed …

TechCrunch reports that initially that period will be seven days, but the company is open to feedback on whether it should be longer or shorter.

Facebook recently announced that WhatsApp passed the whopping milestone of 100 billion messages sent per day, but not everyone wants those chats to stick around forever. Now, Facebook’s wildly popular messaging app with 2 billion users is adding a feature to give people more control on how their words and pictures live within the app. From today, messages — including photos and videos — can now be marked to disappear after 7 days.

Disappearing messages are being rolled out globally across Android and iOS starting today, WhatsApp said. While it’s starting with a 7 day lifespan, it is already looking at playing around with the time limits.

“We will keep an eye on feedback about how people are using it and liking it and see if it needs adjusting in the future,” a spokesperson said. “For now we are starting with seven days, because it feels like a nice balance between the utility you need for global text based conversations and the feeling of things not sticking around forever.”

Some like disappearing messages because it ensures that personal messages are not hanging around forever, while others just like group chats to be made more manageable by being limited to a week’s worth of posts.

The fact that WhatsApp uses end-to-end encryption did pose some challenges for Facebook.

“[End-to-end encryption] was partly why it took us so long to implement this feature, because we wanted to retain the e2e capabilities that WhatsApp users expect and love,” the spokesperson said.

It’s also important to know what messages will disappear on schedule whether or not they have been seen by the recipient.

Earlier this week, WhatsApp announced that it was making it easier to free up storage on your phone.