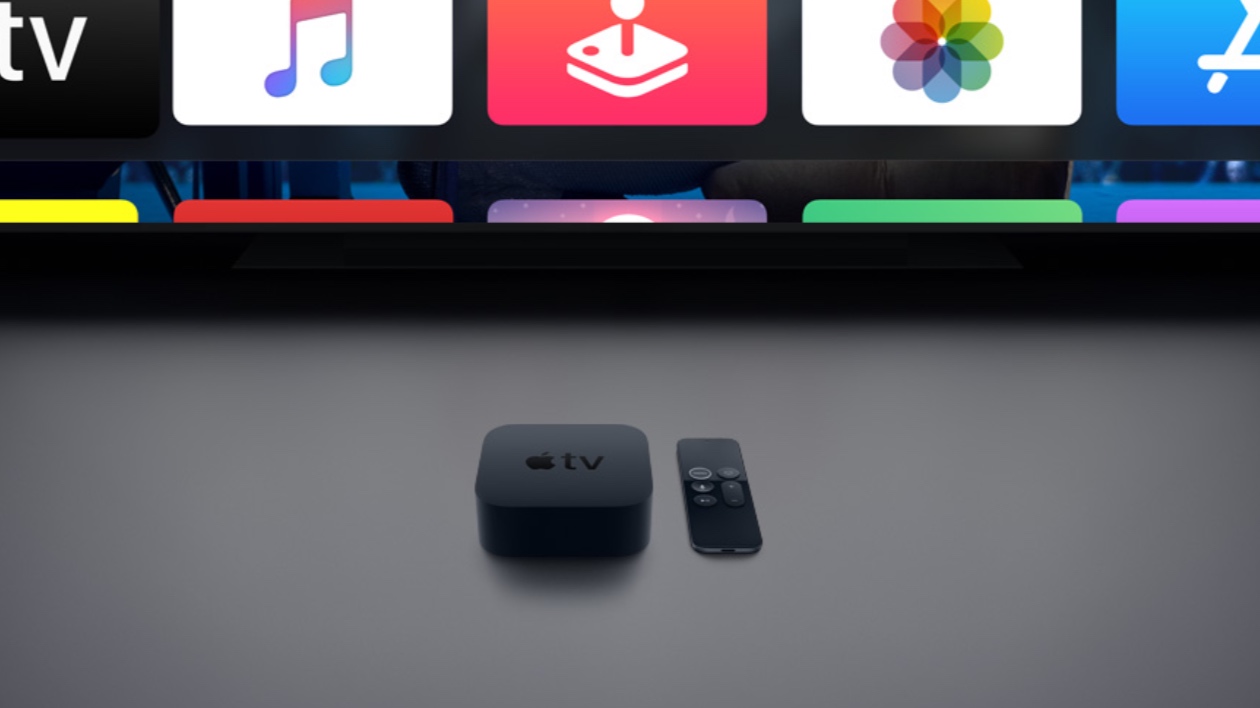 The Apple TV app is Apple’s attempt to unify content from multiple channels and providers into a single experience with an Up Next queue of shows in progress, recommendations about what to watch next, and access to your purchases from the iTunes video and movie library.

The Apple TV app is the home for Apple TV Channels like HBO, Showtime and Starz, in addition to Apple TV+ (Apple TV Plus). Apple’s streaming service is only available through the TV app. But you don’t necessarily need an Apple device to enjoy it. The TV app is going to be available in lots of places …

The TV app lets you stream and download content from Apple TV Channels, as well as watch iTunes movies and TV shows — either purchased or rented. Apple TV+ is simply one of the Channels that are on offer, with Apple TV+ available starting November 1st.

Apple TV+ and Apple TV Channels let you share a single subscription with up to six family members, across all of their devices that have the Apple TV app. You can watch ad-free and on demand, with shows available to instantly stream or download to watch offline.

So, if you are looking at Apple TV+, but don’t know how to watch, here’s where the TV app is available.

Unsurprisingly, the Apple TV has the TV app. The Apple TV app; the Apple TV set-top box. By default, the TV app is the first app in the top row of tvOS and you can access it just by pressing the TV button on the Siri Remote. As well as the newer Apple TV HD and Apple TV 4K, Apple is also offering the TV app to the discontinued third-generation 1080p Apple TV.

What makes the Apple TV app on tvOS unique is that in addition to Apple TV+ and Apple TV Channels content, it can also surface content from other apps installed on the Apple TV. For instance, apps from cable providers or streaming services like Hulu. The third-party recommendations are shown integrated into one place in the TV app, and you can automatically be directed to the apps when you click on something to watch.

The TV app on tvOS is also the best in terms of user experience with the most fluid animations, transitions and page design. You can see full-screen trailers as you swipe through shows and even get a glimpse of what to watch right from the tvOS Home Screen. You can even switch between multiple users to manage separate Up Next queues, so you can pick up right where you left off and not interfere with other people’s progress.

However, the Apple TV is also the most expensive option for a dedicated Apple TV app box as it includes powerful CPU to also serve as an Apple Arcade game machine, iCloud Photo library client and much more. Hopefully, in the future, Apple will offer a less-expensive modern Apple TV option.

If you buy a new Apple TV — Apple TV HD or Apple TV 4K — you can get one free year of Apple TV+ (which is otherwise priced at $4.99/month). This is technically a $60 value offer, which can reduce the sting of the Apple TV’s price … but for 4K you need the Apple TV 4K which is still a hefty $179 starting price. 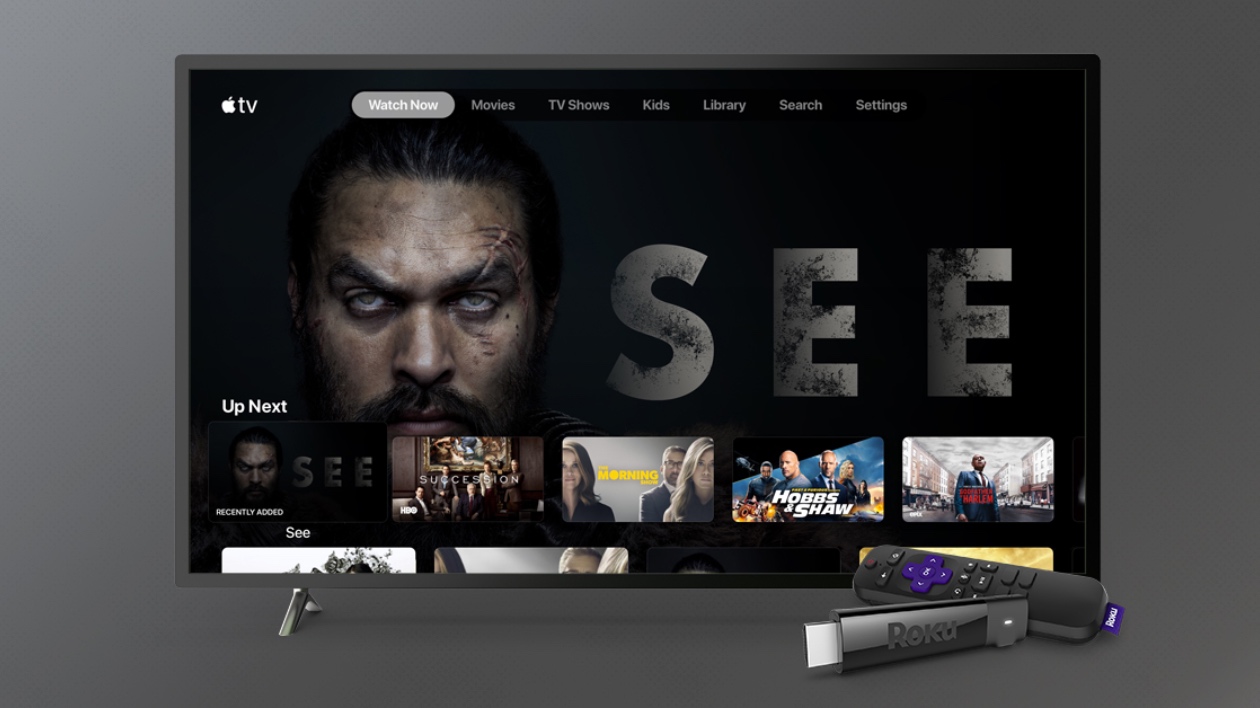 A much cheaper option for TV accessories to access the TV app on the big screen is to use a Roku device, like one of their streaming sticks. Even the high-end Roku Ultra LT is still half the price of the cheapest Apple TV.

The Apple TV app is now available as a Roku channel, free to download and compatible with most Roku devices, with support dating back several years. It can play back at 4K resolution if you have a 4K Roku. The TV app on Roku can access the iTunes library, Apple TV Plus and Apple TV Channels. It does not feature the other TV Provider features that the Apple TV can do.

When you install the app on the Roku, it will ask you to sign in with your Apple ID. This connects it to your account and payment method for buying shows, or subscribing to Apple TV channels. As a third-party product, Roku does not qualify for the free year of TV+ — you only get a seven day free trial. Still, buying a $50 Roku and paying $60 for a year of TV+ is still the best deal in terms of bang for your buck. As the subscription is tied to your Apple ID, you can still share the purchase across your family’s other devices.

The Amazon Fire TV will also be getting an Apple TV app to use in the future. This offers an alternative option to Roku and the Apple TV set-top boxes. The experience will be similar to what can be found on Roku. Unfortunately, a firm date for when the TV app will come to Amazon Fire TV has not yet been announced. However, it will likely be sooner rather than later given Apple’s desire to get as many eyeballs watching its Apple TV+ originals as possible. If you already have an Amazon Fire TV product and are interested in TV+, maybe hold off buying an Apple TV or a Roku for the time being. 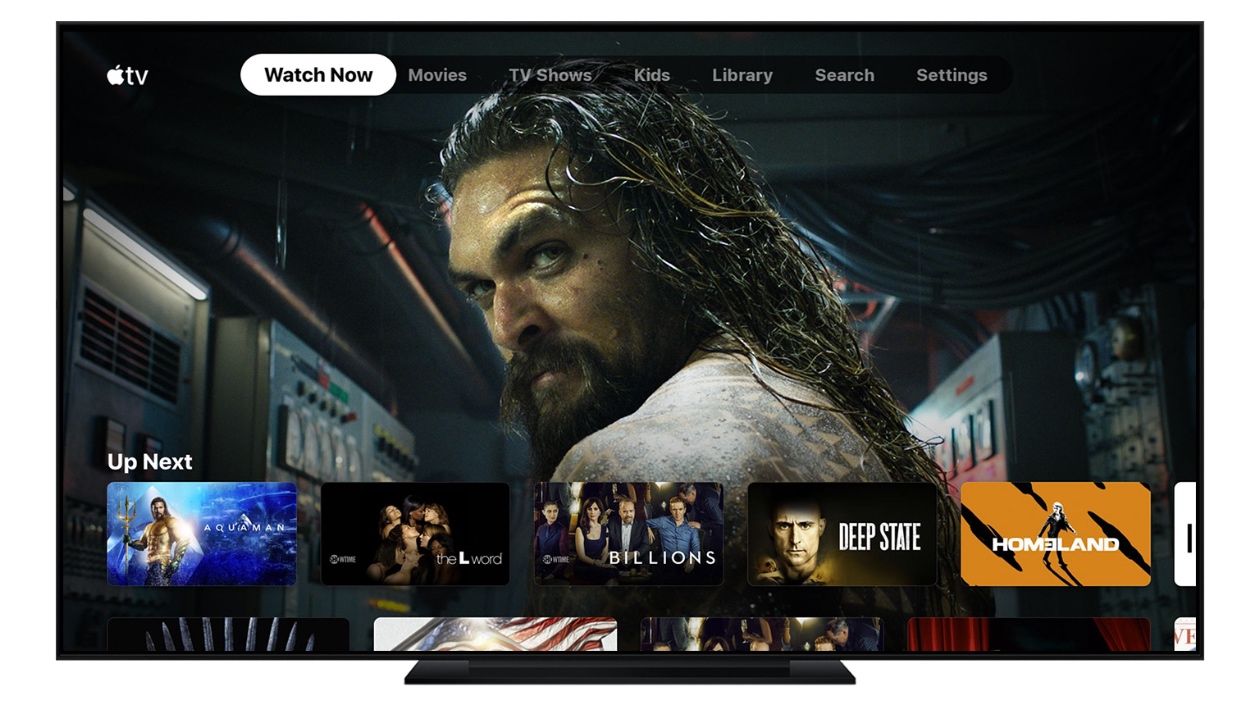 Apple is also offering the TV app directly on some smart TVs. This is an elegant option as it means you do not have to have a separate dongle or set-top box of any kind. Apple has said that the TV app will come to smart TVs from Samsung, LG, Vizio and Sony.

However, the only smart TVs with official support as of now is Samsung, specifically the following 2018 and 2019 models:

The TV app on Samsung Smart TVs will support Apple TV+ in 4K, Apple TV Channels and iTunes videos. Again, you log in to your Apple ID so purchases made on your Apple account can be shared with Family Sharing.

Samsung smart TVs also support AirPlay so you can beam videos, photos or music from your phone to the TV in an instant.

We will update the post when details for LG, Vizio and Sony TVs are finalized and the TV app is actually available from those manufacturers. 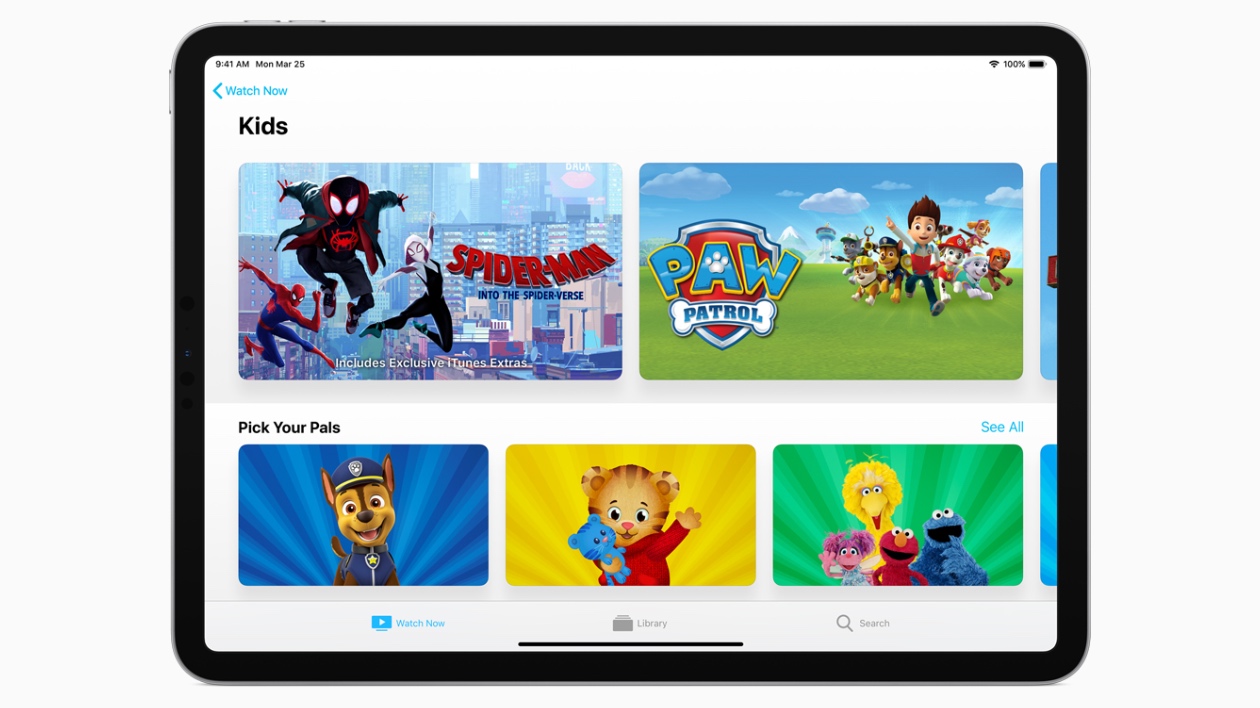 Of course, you can access the TV app on your iOS device. Look for the TV app icon on the iPhone or iPad: it’s black with a white silhouette bearing the Apple TV logo.

Browsing the TV app on iOS is not as polished and pretty as the tvOS experience but it does offer the same suite of functionality. You can access Apple TV+, Apple TV Channels, iTunes movies and TV shows, in addition to integrating content from third-party video apps. All of the TV Provider features are only available on iOS or tvOS.

With the TV app on the iPhone and iPad, you can also get notifications for when new episodes are released. There’s also a home screen widget to put in your Today view. Watch progress about what you have been watching automatically syncs based on the logged-in account. You can also fire up shows using Siri and even ask Siri to start playing something on a HomeKit TV, without having to touch the screen at all.

Purchases of a new iPhone or iPad (or iPod touch) come with a free year of Apple TV+. This means you can buy any iOS device from Apple — whether its the latest iPhone 11, an older iPhone 8, or the cheapest entry-level iPad — and essentially get $60 of Apple TV+ service for free. When Apple TV+ launches, simply launch the TV app and the ability to redeem your free year trial will be automatically presented to you. The new TV app is available on iOS 12.3 or later.

You can also get the TV app on the Mac. You need to install macOS Catalina but then you can get the new TV app on your MacBook Air, MacBook Pro, iMac, Mac mini or Mac Pro.

The TV app replaces most of iTunes’ library functionality, in addition to bringing Apple TV Channels to the desktop for the first time. You can watch in 4K HDR through the TV app as well, something that wasn’t possible before. 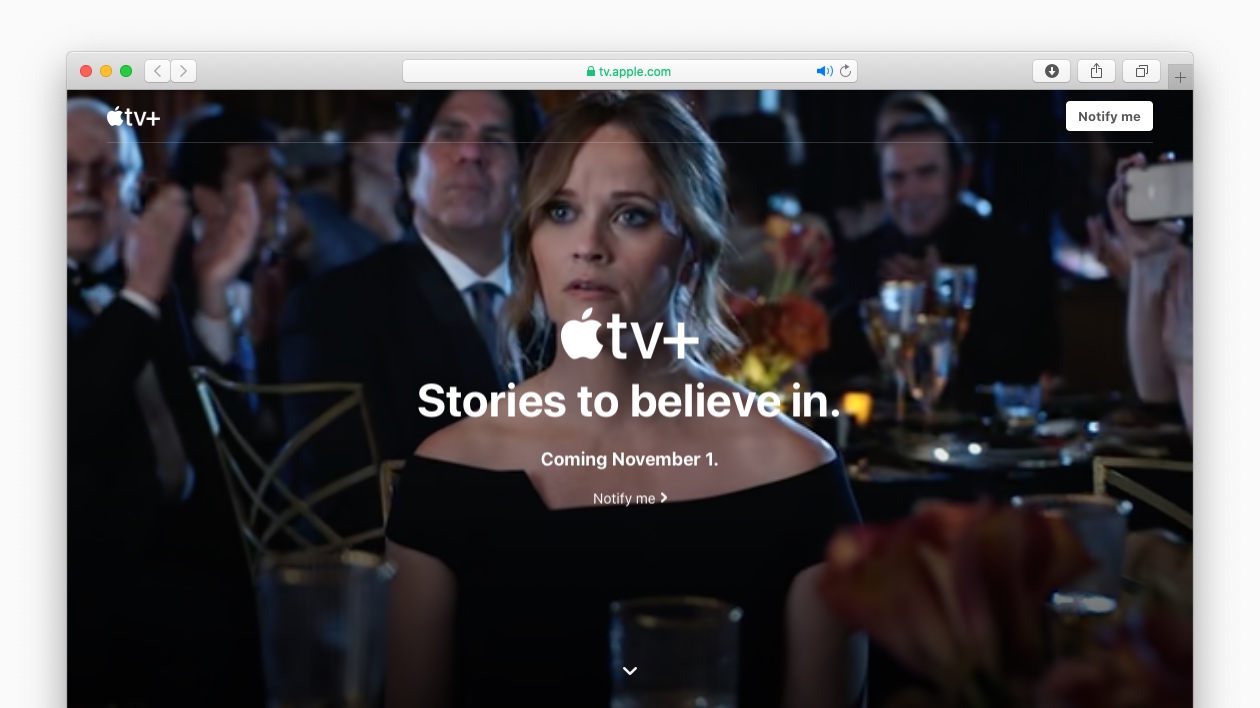 The Apple TV app is also coming to the web. The TV app will be available at tv.apple.com starting November 1st. The TV app can be watched on the web on Windows or Mac, or even some games consoles with a web browser.

Apple has said that the TV app on the web will officially support Safari, Firefox and Chrome web browsers.

At least initially, it seems only Apple TV+ will be available on the website. You will be able to sign up online and watch Apple’s original shows and movies. However, it doesn’t seem like that the other typical TV app features — like iTunes or other TV Channels — will be offered online, at least initially.

Coming soon to a screen near you

Apple is investing a lot in its new originals and overall streaming ambitions. It is expanding its TV service to new platforms very aggressively. We will update the post as support for new streaming boxes, streaming sticks, TVs and more become available. Apple is even screening some Apple TV+ content, particularly its original films, in real movie theatres around the world.