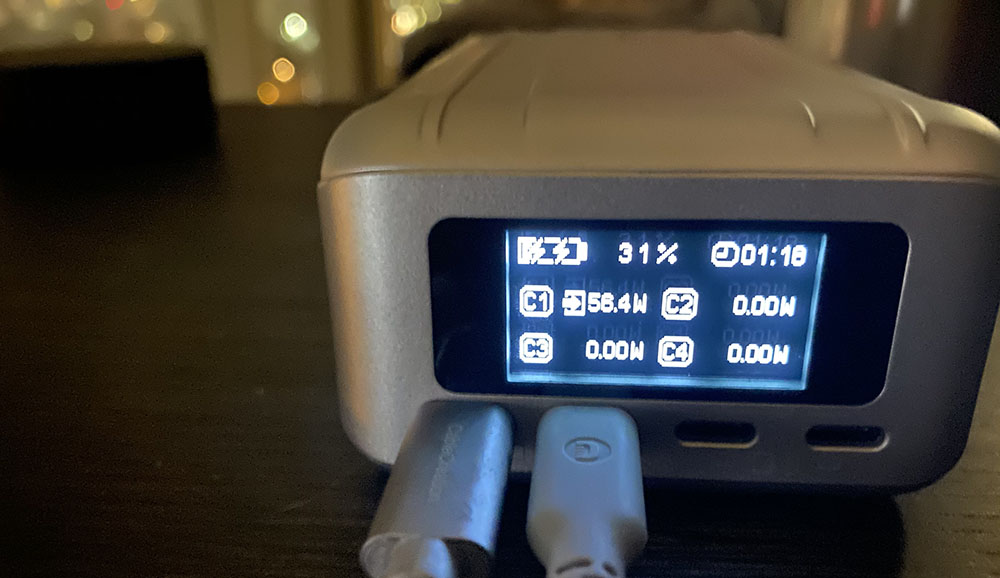 The Zendure SuperTank Pro is an updated version of the existing Zendure SuperTank power bank. The original had become one of the power banks of choice for those who need to significantly extend their MacBook Pro battery life, and the new model has the same massive 26,800mAh capacity.

The Pro differs from the original in a number of ways, which we’ll get to below. But the most visible difference is that the USB-A ports have been replaced by four USB-C ones…

The SuperTank Pro has an aluminum casing that looks very reminiscent of the Zero Halliburton suitcase. It measures just under 5 inches long by 3 inches wide by 2 inches thick, and weighs a hefty 1 pound 4.5 ounces.

It fits in the hand, but you certainly know you’re holding it. It’s not something you’re going to carry in pants pockets unless you’re wearing cargo pants, and even then you’d look very lopsided. Don’t even think about putting it in a suit jacket. This is a power bank designed for those who value capacity over pocketability, and most people are going to carry it in a bag.

There’s a single button at the side to wake it and display the current capacity.

The SuperTank Pro is designed for travel, Zendure keeping just below the 100 watt-hour limit for taking a lithium-ion battery onto an airliner.

You get a single USB-C to USB-C cable with it (one capable of the maximum power output), but you don’t get a charger – more on that in a moment.

The power bank requires a very beefy charger to fuel it, which is why you don’t get one with it – that would add a substantial amount to the cost.

The good news is that it supports pass-through charging, so plug your MacBook Pro charger into the SuperTank Pro, and then connect that to your Mac, and it will charge both. Using the Apple charger for my 16-inch MacBook Pro, I found it took a little over 1.5 hours to fully charge from empty.

There’s a rather complex matrix to illustrate the different ways you can use the SuperTank Pro. That’s shown below, but the most likely configurations for Apple users are:

Although the 16-inch MacBook Pro can draw a maximum of 100W, and the 15-inch model a maximum of 87W, I’ve never seen anywhere close to that kind of draw from either machine, even when rendering video in the background and doing other things in the foreground. Realistically, this means the power bank will simultaneously power two MacBook Pro machines plus an iPad Pro.

There are two main ways you can use a power bank like this. First, if you’ll be using your MacBook continuously all day away from power, you can plug in the SuperTank Pro, let it exhaust the power bank battery first and then switch to your MacBook battery.

This is the most demanding way to use it, and I found that it only increased my total battery life by around 2.5 hours. That’s not to be sniffed at, and would definitely extend a day by a very worthwhile amount, but it was a lot less than I’d hoped.

The second approach, if you’ll be using your Mac on and off during a long day, is to use the MacBook Pro’s own battery while you are using it, and then recharge it in between times. When traveling, for example, you might be using the Mac in a taxi or train between hotel and airport, charge it while wandering through the airport, use it in the lounge or at the gate, then charge again until you need it in the flight, use it as much as needed during the flight, then charge again ready for use at the other end.

I’m somewhat wary of Kickstarter projects, given that there have been a number now that have failed to deliver, but in this case it’s an updated model from a company with a good track-record. It was also fully-funded within 20 minutes. I think, to be honest, some companies use Kickstarter primarily as a marketing tool rather than because they need the funds to launch.

The Zendure SuperTank Pro is expensive by battery pack standards, but not unreasonably so given the power. There are, of course, plenty of cheaper ones available if you’re just looking for something to keep your iPhone charged.

This is the sort of product you buy only if you know that you need the power to significantly extend the life of a laptop like a MacBook Pro. If you perform the kind of work that requires one of these, it’s likely a relatively small expense in the scheme of things. I could even see some pros carrying more than one for things like an outdoor shoot with a need for instant review or editing on a Mac.

The additional capacity when powering your Mac directly from it is disappointing. But the recharging capacity is great, and that’s the more realistic scenario for most of us. Travel still seems a rather far-off dream at present, but when flying is once again a regular part of my life, this will be the power bank that comes with me.

The Zendure SuperTank Pro is available on Kickstarter with super early-bird pricing starting at $149.